Today, it snowed over Reigate!  The sky was actually seen falling at lunchtime.  Well, OK, more accurately, cirrus cloud was seen all over the sky at midday and wonderful virga fall streaks trailed behind . Virga is a beautiful treat for cloud watchers and today was an extra-special display.  Virga is any form of precipitation (snow, ice, rain), usually falling from medium or high cloud, that evaporates before reaching the ground.  So… it snowed over Reigate today but 10km up and it never hit the ground.

Whilst it was a warm day down in Reigate (100m, Tmax 25ºC), at 30,000 feet (10,000 m) it was a chilly -45ºC. A moist humid layer of air at 10,000 m moved in from the west filling the sky with cirrus clouds which are formed from ice subliming in humid high altitude air. Cirrus is a thin wispy cloud but can precipitate i.e. “rain”. The ice literally falls from those thin cloud veils. The cirrus today were being carried along by a brisk 40 mph westerly wind. The ice rapidly fell into slower wind speeds below: at about 5000m the wind was only 20mph. Hence, the cirrus appeared to leave veils of trailing ice particles: VIRGA.  Some were probably initiated as contrails which broke up in the brisk winds. A much lower layer of cumulus appeared from local convection at about 1000 m, where the air temp was still 20ºC.

Here are the charts for humidity at 10,000 m (300hPa) and 5000 m (500hPa): note the very humid air aloft and the very dry air at 5000 m.  The ice never of course hit the ground because it was evaporated / sublimed at great height.  Only passing aircraft might have experienced any virga precipitation.

A collection of outstanding high level clouds for Reigate

spring is here at last!

Reigate one of the warmest 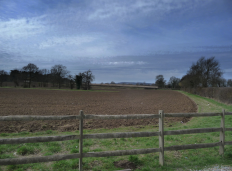 Reigate was one of the warmest places in the UK today.  The town bathed in air from North Africa at nearly 20ºC.  The strong SW wind driven by a 100mph jetstream aloft along a decaying front brought some superb mid and high level clouds across Reigate.  A variety of unusual clouds were visible.

Cirrocumulus is a high level cloud and unusually covered much of the sky from early on this morning. The light dappled mini-cumulus flecks 30,000 feet in the sky were beautifully fibrous in appearance.  Occasionally the cirrus rolled into parallel lines converging on the horizon: cirrus radiatus.

Virga is another unusual site for cloud spotters.  These are ice crystals falling from cirrus or altocumulus: this precipitation evaporates before reaching the ground so appears as a tail streaking out from underneath cirrus or altocumulus.  Several virga could be seen during the day but tend to disappear quite quickly.

Unusual altocumulus lenticularis wave clouds rolled in at the end of the day on a decaying front and even deposited a few drops of rain momentarily.  Virga making it to the planet surface!  Altocumulus lenticularis are the clouds occasionally mistaken for UFO’s!  They are usually formed by high winds blowing over hills or mountains and creating wave like clouds in the air stream; our lack of high mountains makes them rather rare in the SE.

Although not as warm as today, mild and breezy conditions will persist for many days now. It will not always be dry but less than 10mm of rain is forecast for Reigate over the next 8 days so any fronts reaching us will be weak.

The pressure pattern and direction of our weather will be the “reverse” of those cold days of March: south westerly and westerly winds from the Atlantic will prevail most of the time over the next few weeks.  LOW pressure systems are set to cross to the north of the UK and HIGH pressure will sit to the south: this will keep the jetstream more or less persistently over the UK and drag in milder but moist air, especially for the west. Reigate and the east of the UK will be drier and can expect daytime temps around 15C, cooling towards the end of this week.