Whilst Storm Katie was not a record-breaker by any means she did provide some evidence of stingjet winds in the wrap-around feature that showed up especially on IR satellite photos and rainfall radar in the later stages of her track across the SE and UK.

Here is some analysis from local Reigate Surrey records of these winds to explore this feature more. Stingjets can be the most damaging winds, in this case they were not especially strong.  Professionals, like Matt Hugo (NorthWstWx services) and Simon Lee (MMetReading), saw hints of stingjets during the passage of the storm but what evidence of stingjet winds is there “on the ground” and how can amateur observers watch out for these potent weather features in future?

Still hints of a #stingjet with #StormKatie perhaps not text-book but strongest winds across the SE now. pic.twitter.com/Vy8qYUnNRS

Katie’s rapid cyclogenesis prior to landfall over the UK was a precursor to the formation of stingjet winds.

Stingjets are associated with vigorous bomb-depressions developed in a process called rapid cyclogenesis: in RaCy depressions central pressure falls very rapidly and slows the horizontal surface speed of the cyclone.  A stingjet is a narrow band of gusty winds that descend from high altitude in the latter stages of RaCy depressions.  They arrive from some 3-4km above the ground and are associated with descending stratospheric air into the low core.  Ironically stingjets are associated with weakening fronts and aging cyclones.  This descent of upper air pushes the jetstream lower and this can deliver extremely gusty conditions to the surface in a narrow band that is shown by a cloud hook and matching rainfall pattern.

Watervapour satellite loop from 00hrs to 8am showing dry descending stratospheric air forming a dark slot – dry intrusion – that wraps into the developing low core: a sure signal of rapid intensification.

The hooked rainfall signature below matched a marked increase in the strength of wind and the modest strongest gusts of the whole event of 52mph in Reigate. In exposed places like Redhill aerodrome this exceeded 60mph and over the North Downs at Kenley 68mph was recorded with 70mph in places.

Arriving from high altitude, stingjet winds are unsurprisingly cold with low dew points. So you’d expect a dip in temperature at the surface.  Parts of Wales and Shropshire had snow in this airstream wrapping round the back of the low as it moved into the North Sea. Stingjets match the mature stage of the Shapiro-Keyser cyclogenesis model.  In all respects, they are aptly named as the “sting in the tale”. 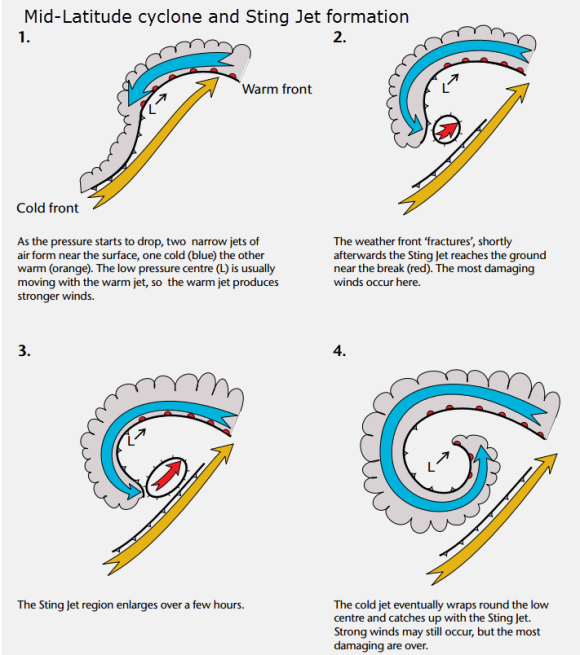 Storm Katie had some generally strong winds (for the SE of the UK!) associated with the southern edge of this cyclone where the tightest pressure gradients developed as pressure fell across the SE: in the narrow warm sector especially.  The lowest central pressure was 971mb.  Our Wight-Wash Oscillation reached 16 or 17mb at one stage: the difference between the pressure over the Isle of Wight and the Wash.

Most significant storms to impact SE England have similar NE tracks through the Bristol Channel and exiting through the Wash. This was certainly the case with October 1987, St Jude 2013 and Storm Katie March 2016. 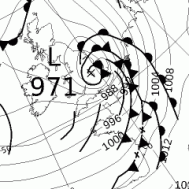 It is more likely that Katie, like other RaCY depressions, developed according to the Shapiro-Keyser model of rapid cyclogenesis which involves a break away cold front fracturing away from the depression core: T-bone.

The wrapped rainfall radar and cloud hook above both suggest a stingjet feature associated with this kind of development. 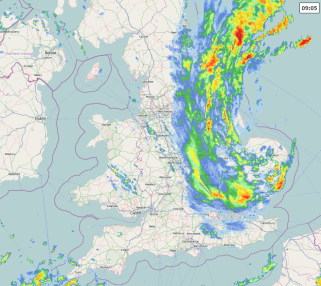 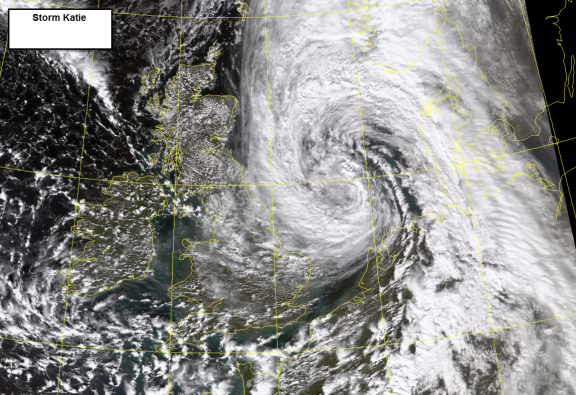 The chart shows the persistent warm sector gales proceeding from midnight on 28 March through to about 5am.  These gales do not exceed 80kmh but they modestly peak just before the passage of the front, an expected pattern.  Fronts then pass through Reigate at about 5am and temperatures fall as expected, as do gusts.  However, from 7am gust strength sharply increase, this matches the timing of the sting jet cloud feature on satellite photos.  This increase in wind speed had no front associated with it and therefore suggests evidence of a stingjet process: arriving out of the blue! 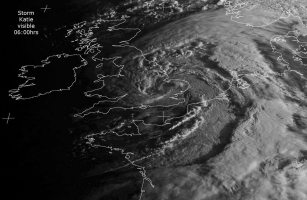 Note the temporary drop of temperature to a minimum and recovery after the departure of strongest winds.  This again suggests these winds are not frontal in origin but are part of the stingjet process.  Are they associated with a sting jet of descending high altitude air originating some 3-4km in the troposphere?  I’d like to think this is a sting jet signature but will need confirmation from official sources to pin this down.

For comparison shown above is a “normal” cold front passage from the previous weekend when a cold front squall line of some note passed through.  Note there is no dip to minimum temperature associated with the maximum gusts and temperatures remain cold after the passage of the front because of the insurgence of cold polar air.   This is more typical behaviour when it comes to frontal passage.

Other charts and references support this idea, but some not unfortunately not quite with same timings.