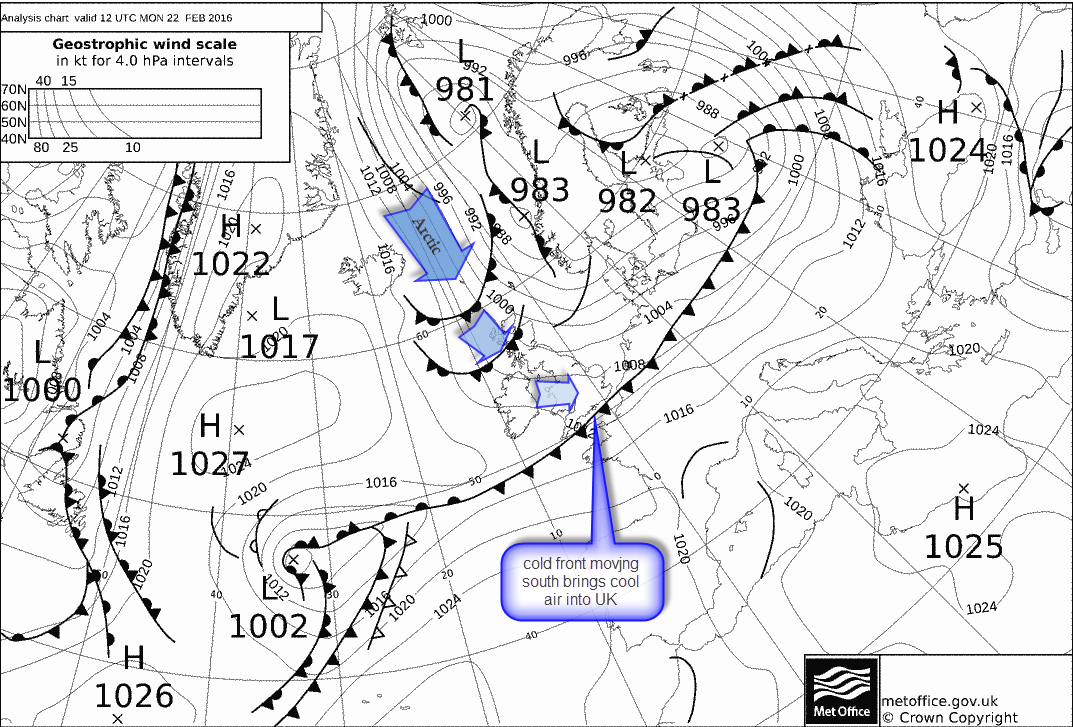 The UKMet analysis chart for today shows a building ridge in the Mid-Atlantic and a complex large LOW over Scandinavia.  This is dragging down a cold Arctic airmass, which will usher in progressively colder upper air each day through to Thursday.  The low NW of the Azores is drifting ESE but filling and can be ignored for now. 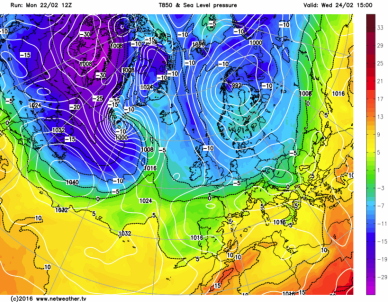 Air at 850hPa, roughly 1500m up, is used to judge airmass characteristics because, at this height, the airmass is not affected by diurnal and surface changes like sea, forest, mountain, towns, which can create big temperature variations near the ground.  The 850hPa temperature by Thursday could dip as low as -8C over Reigate.  Whilst this is not extra-ordinary it is about the coldest and most sustained chilly dip we have seen so far this winter.  Skies will be mostly clear and nights will turn frosty with day Tmax struggling to 5-6C. Wind chill will make it feel more like freezing for most days this week.

High pressure nudging in from the Atlantic will keep any precipitation light and restricted to coastal areas.  Friday sees things get interesting and unusual. 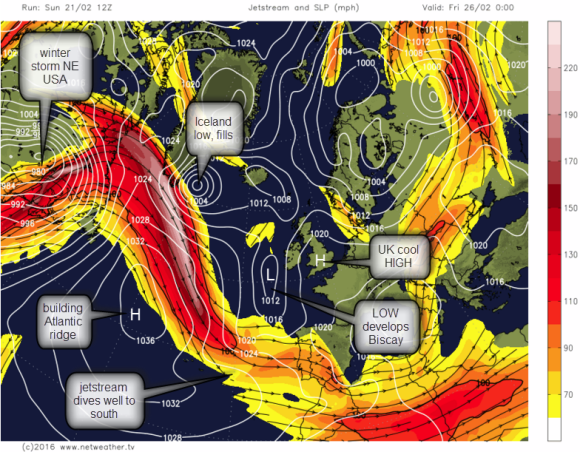 A southerly diving jetstream gets into action on Friday and is set to amplify the 500mb trough and deepen a low off the west coast of the UK and develop it further into Biscay into Saturday and create a cut-off feature by Sunday.

The Atlantic / Biscay LOW is unlikely to impact us in the SE much directly but, as it passes south of us through the weekend into Europe it will drag in cold easterly and then NE winds.  Our own mini-Nor-Easter!

Nor-Easters are famous powerful winter storms in the USA.  Our own version this weekend is a rather tame feature in comparison but notable because it is relatively unusual and has potential to bring a more sustained wintry feel to the SE through the weekend and maybe into next week.

This southerly tracking LOW will move NE through the continent and will set up a cool Easterly then NE wind over the SE. Nothing outrageously cold for us because the coldest air is likely to stick further to the north east in Russia and Scandinavia.  Nevertheless, by Sunday a brisk NE wind with upper air of -8C or so will continue to make it feel chilly, after a cool week.

The winds over the SE will therefore swing from  Northerly mid-week through to Southerly on Friday and thence to Easterly and finally Nor-Easterly / Northerly by Sunday. This anti-clockwise rotation is called backing and often ushers in cold air.  This is despite the wind turning through a seemingly mild southerly direction.  Remember we are sitting well north of the jetstream this weekend, which is somewhere in the Mediterranean, thus all airmasses are relatively cold and polar.

Pressure stays relatively high throughout this “mini-nor-easter” episode and so this will limit chances of any snow unless the low decides to track further north nearer the UK OR we pick up sea effect snow as winds turn NE over a relatively warm North Sea. 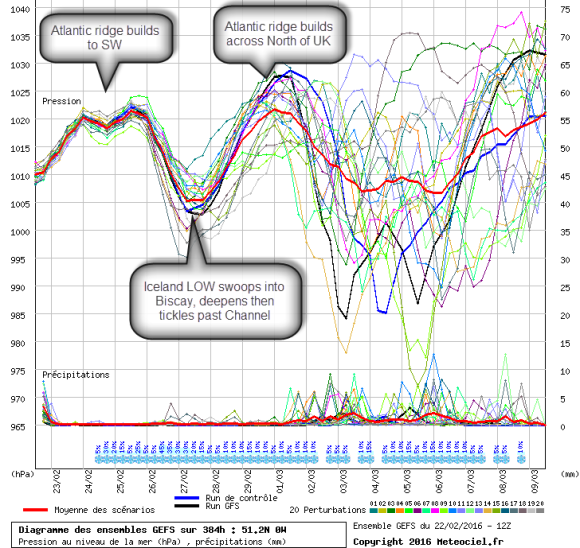 Snow showers are theoretically possible near the North Sea coast if Sea Effect / Lake Effect snow can be kicked off.  Such sea effect snow occurs when (very) cold air masses cross warm sea surfaces.  This can trigger lines of convective showers that dump lots of snow in places like the Great Lakes in the US.  Sea Effect snow occurs best when there is a temperature contrast of at least 13C between 850hPa (which must be well below freezing of course) and a warm sea surface. 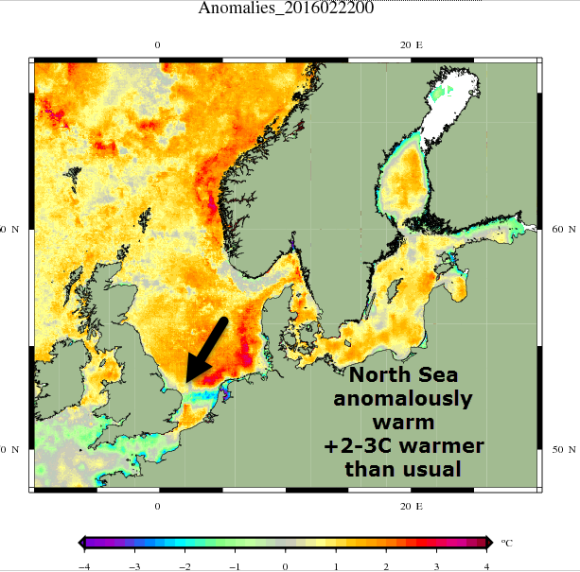 The charts above show the North Sea is anomalously warm at more than 8C across a large area, although cooler near UK shores.  The upper air temps this weekend are around -8C, making a potential 16C contrast in temperature, theoretically sufficient to trigger showers. Unfortunately the airmass seems to be dry and, at this stage at least, rather stable. Looking ahead the cold spell could last into next week. Check our twitter account @rgsweather for local updates but always check professional weather forecast providers for decision making, of course. 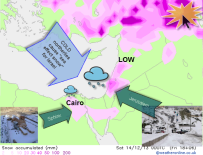 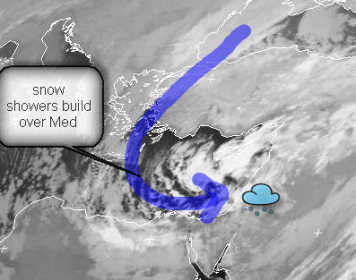 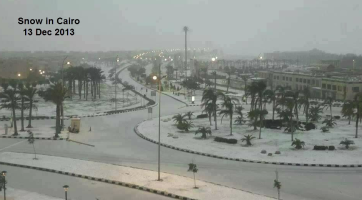 Cairo snow first for over 100 years

Reputedly, the first snow for over 100 years has fallen on the Sphinx but several photos on the web are actually of a model in Japan!  Anyhow, snow certainly fell across Cairo, N Egypt and even deeper snow has fallen over Israel, including Jerusalem and more widely across the Middle East and Turkey.  The upper air temperatures across Israel and Egypt are cold, of course, but only -2c or -3c at 850hPa which, in the UK is common and rarely produces snow for us… as a rule of thumb our 850hPa temps need to be at least -5c or lower to deliver much snow to the UK, especially the south away from hills.  So why did it snow on the Sphinx when the airmass was not really that cold?  BTW check this link for the sphinx in the snow pic http://urbanlegends.about.com/b/2013/12/14/sphinx-in-the-snow-photo.htm 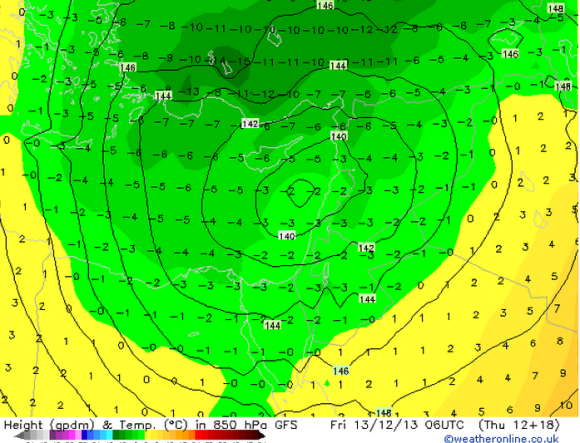 Well, it looks like the snow in Israel and Egypt is what meteorologists call “Lake or Sea Effect snow” and is quite common near the Great Lakes in the USA and across Japan but of course rather more unusual in the warmer Middle East. A deep LOW pressure (Winter Storm Alexa) swept across to the north of Israel dragging in bitterly cold strong N winds across Egypt and Israel and the Middle East as a whole.  The air originated from further north over continental Asia, where winter temperatures are extremely cold. The strong wind has crossed the Med (still fairly warm of course) in a wide arc across the warm sea surface which has allowed a good deal of moisture to evaporate, adding humidity and instability to the air mass.  A temperature difference of at least 13c is required to produce the greatest evaporation and moisture input required to produce plenty of “sea or lake effect snow”. SST across the Med off Israel is currently over 20c and this air mass had a temp of -3c at 850hPa and around freezing at sea level.

On hitting land the strong wind experiences friction and literally “piles up” against the coast causing convergence and uplift.  The uplift, especially pushed up over the heights of Israel, causes cooling in the frigid polar air and, eventually, precipitation in the form of snow. Ingredients for sea effect snow were therefore all met in this case:

Elsewhere in the region, winter storm Alexa has caused flooding in the Gaza strip http://www.bbc.co.uk/news/world-middle-east-25387020