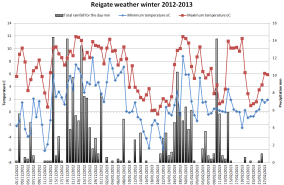 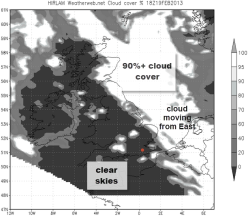 Cloud is spreading from the East tonight associated with the cold easterly winds approaching tomorrow but the sky will hopefully remain clear over Reigate for a siting of the International Space Station this evening. The ISS will make a visible pass over Reigate at 18:57hrs this evening moving from west to east across the sky in just over 2 minutes. Where do we look? Start by looking due west and then nudge a few degrees to the north. The ISS will make an appearance some 40′ above the horizon near Andromeda at 18:57:04 hours. It will ascend to a position almost vertically above our head when it will be only 260 miles away. It is brightly illuminated by the sun and will disappear into the shadow of the Earth as it moves down across the eastern horizon. The ISS is orbitting at over 17,000 mph and takes about 1hr30mins to orbit the Earth.

Return of the Russian ice bear! 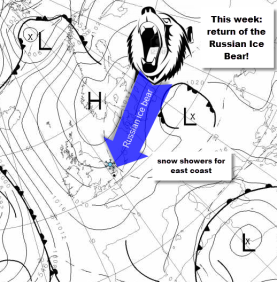 The “Russian ice bear” is escaping again and will arrive in Reigate from Tuesday!  A HIGH pressure developing over Scandinavia and a LOW over Europe will open the cage and let the Russian ice bear gallop across Northern Europe and arrive freezing and growling in the UK from mid-week.  Expect cold easterly winds on the back of the bear.  The frigid continental interior, where the bear lives, has had the whole winter to cool down: the source region is now -10ºC and frequently lower. (View the Urals meteorite shower youtube clips again to get an idea of how cold the source region of this air mass is!) There is the potential for some of the coldest temperatures of this winter yet to be recorded in the SE as the bear bites back.  The week looks mostly dry but snow showers are also possible, especially further east.  The easterly winds warm up on their journey west and also pick up some moisture from the Baltic and comparatively warm North Sea; any warming causes instability (a tendency for air to rise and form cloud and rain/snow) and snow showers are therefore possible on the east coast, some of these could reach further inland on the strong easterly winds forecast.  Whilst the duration of this cold snap is not certain, the end of this sort of episode often sees westerly winds return with substantial snow on the leading edge of fronts.  How and when the bear returns to it’s cage remains uncertain,  but it will be prowling around Reigate from Wednesday on wards this week.

Air blast: from Longyearbyen to Majorca in 24 hours!

A 100 mph+ jetstream will shift air currently over the Arctic islands of Svalbard all the way down to Majorca in the Mediterranean. This air will travel 3000 miles in around 24 hours. It will bring cold but eventually brighter conditions across the UK as the Atlantic HIGH slips a little over to the East on Thursday.  Light snow / sleet / rain showers are likely here and there, especially on Wednesday when shower bands pass over in the morning, but generally they will be few and far between and nothing to get excited about for Reigate, eventually clearing up to clearer skies. Enjoy the crisp Polar sunshine and excellent visibility brought from the Arctic!  Sunday and Monday look interesting as a slider LOW (see colour chart) could slip SE down around the HIGH and bring some milder air which meets cold easterlies on their back: a potential recipe for significant snow in the South East. Keep watching for developments.  Meanwhile, wrap up – the Arctic winds will feel well below freezing throughout the rest of this week.

Weather warning: 10,000 buckets of rain expected to fall on our school on Friday! 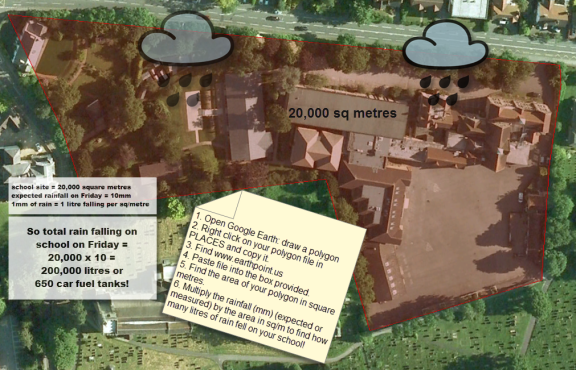 Rainfall is usually measured in millimetres but it is hard to imagine how MUCH WATER this actually means. It is easier to use the idea that 1mm of rainfall is equal to 1 litre of water falling on every square metre of ground.  Friday is going to be a wet day with 10mm of rainfall expected.  But how much water is actually going to fall on the school during this wet day? Here’s how to find out:
1. Use Google Earth to plot a polygon.
2. Right click on the polygon file in the Places list on the left hand side of Google Earth and COPY it.
3. Find http://www.earthpoint.us/Shapes.aspx
4. PASTE the polygon file into the empty box mid-page.
5. Select sq metres for the area units and click “view on web page”.
6. This brings up the AREA of your polygon in sq metres.
7. Now multiply the area by the expected or actual amount of rainfall in mm.
8. The result will be the litres of rain falling on that area.
On Friday we can therefore expect about 200,000 litres of rain to fall on Reigate Grammar School. This is about the same as 11,000 buckets or 650 car fuel tanks being emptied onto the school grounds during the course of the day.
Weather advisory: bring an umbrella!
Update: in the end, the actual rainfall only delivered 6mm of rain onto RGS… the LOW pressure didn’t pep up to form the awful winter storm forecast earlier in the week. Friday turned out to be wet in the morning and then cleared up to be a nice day.  Nevertheless it still added up to 6000 buckets of water thrown over the school!

An unusual winter pressure pattern is building in the early part of next week: a HIGH over Spain and NW Africa and deep LOWS over the Atlantic to the NW of the UK will combine to create what some meteorologists call the “blowtorch”. The relative position of HIGH and LOW pressure will funnel Tropical air from the Azores direct to Reigate possibly raising temperatures to 12°C on Tuesday (the big map shows temps for today, Saturday). This effect is sometimes called the “BLOWTORCH” (or hairdryer) because it can bring unseasonably high temperatures and melt snow rapidly across NW Europe (this blowtorch could reach as far as Russia where snowfall has been extreme). Reigate snow will be long gone by Tuesday but the warming effect could still be marked and a big contrast to a week ago when Tuesday temperatures fell to -6°C. Don’t break out the flip-flops just yet! Unfortunately, the blowtorch is unlikely to last more than a day or two at most and, in any case, it will be accompanied by rain and wind which might make it feel fairly unremarkable! Watch the video clip below which shows temperatures rising across the continent and the cold being beaten back as BLOWTORCH blasts through Europe!