Lycra or not? gotta warm feeling about @RunReigate :-)

5,000 runners and thousands of spectators are expected to enjoy a fantastic day for the Run Reigate Half Marathon on Sunday 21 Sept in Priory Park. It is a long way ahead to forecast with any accuracy but the weather at the moment for Sunday 21 Sept suggest Reigate is maintaining warm temperatures (Tmax 22-25C), light winds with sunny spells but with possible scattered showers.  This week is warming up and could even reach a heat peak by Thurs/Friday of up to 25C but Sunday currently looks to cool slightly.

Next Sunday is a long way ahead of course and things can change a lot so updates will be necessary.  In particular, Atlantic frontal systems are nearby but a re-building high pressure to the NE looks to keep them at bay for next weekend.  Do check back and follow twitter @RGSweather for updates. Also please note this is a local amateur educational weather station site so of course consult professional weather providers such as the UK Met Office for important decision-making purposes 😉 .  Here are synoptic details to explain more about what is likely to happen this week in the lead up to Run Reigate. 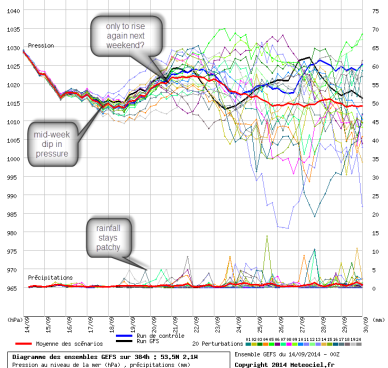 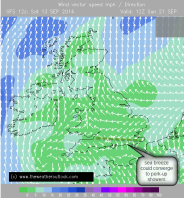 Light winds, but sea breeze might build a shower

and check how warm!

The current blocking omega high pressure that has brought such warm and settled weather over the last two weeks or so takes a bit of a nudge from the cut-off LOW near Iberia to the SW this week.  The chart above left shows pressure falling throughout this week to Friday and then steadying out but with a hint of a rise in pressure for Sunday.  Falling pressure in warm conditions means scattered showers become more likely. By mid-week the Fax met office chart below shows a warm easterly / SE flow across the South from a warm continent as a shallow trough extends across N France and the Channel with weak fronts to the south bringing a risk of showers that could reach S UK at times, though no drama is expected with a slack pressure pattern and the jetstream hundreds of miles to the north of the UK, well out of the way.

The charts below show the same LOW to the west of Portugal/Spain niggling away at the HIGH and moving a little closer to UK SW shores.  This is not indicative of a full breakdown, however, as the HIGH looks to build back next weekend, albeit to the NE and probably briefly before a possible collapse east thereafter as fronts and depressions eventually break through from the Atlantic, but that is all uncertain.  Next weekend could be Summer’s last stand! 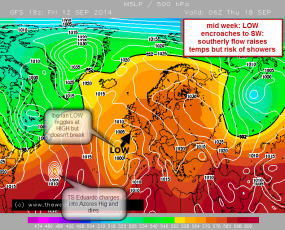 As said, during mid-week the HIGH is forecast to edge further away to the NE causing pressure to fall in the SW and South, but not enough to allow a complete breakdown.  Lower pressure will increase the threat of showers that could push into the SW and south of the UK, especially Thurs/Fri, though details are sketchy on how far they reach east, especially in light winds and rainfall totals look small and patchy.  Reigate could stay dry the whole time in this scenario.  On the other hand, any showers that do perk up could potentially be thundery and quite heavy (apologies if this appears to be weather obfuscation!) . The most noticeable effect of the niggling Biscay located LOW is to build a slack warm flow through the week from the SE / S / E bringing in potentially warm / very warm temperatures from a hot continent for the time of year.  These could even reach mid to high 20’s at end of next week according to current charts, though this is the max likely and the weekend looks to cool down somewhat which is good news for runners.  France is set to hit 30C in places later this week if this pattern comes off.

warming up, but wetter too

some heavy showers end of week?

but COOLS off a tad next weekend

Despite the scary looking rainfall charts above, the HIGH pressure should keep fronts at bay at least on current model runs for next weekend.  Note the rain spikes in the black chart above show that MEAN rainfall values (the white line at the bottom) are generally much less than 5mm which is hardly very much rain at all and certainly no wash out.  Also, take note of the overall conditions for the forthcoming week in the summary ensemble charts below: warmer than average temperatures and drier than usual, showing that any showers are likely to be scattered and not add up to significant totals.  The high CAPE values (convective available potential energy) give an indication of potential instability which could trigger sharp showers or thunderstorms but these are often over-done this far out and settle down much lower nearer the time.  Needs watching tho.

SO… for Run Reigate this is a good outlook for the time of year.  It is especially good as a breakdown in the weather has been repeatedly threatened for sometime but is still being effectively held off by the blocking High which models currently suggest will build back for a while next weekend.  Here’s hoping they stay on target with this idea!  Good luck runners… RGS will be out assisting, running and spectating.