Ups and downs, but mainly down 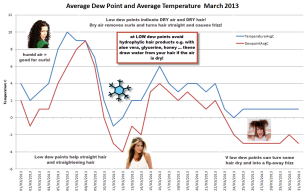 The opposite of what should happen, did happen.  March started with rapidly rising temperatures reaching over 16°C in the first week but things deteriorated rapidly after that as a Polar blocking HIGH built to the North and pushed vigorous easterlies and north easterly winds towards the UK for much of the month.  A number of Atlantic LOWS tried to bust the BLOCK but were pushed to the south of the country where fronts between freezing polar air and milder air created exceptional blizzard-like conditions for some areas.  The Channel Blizzard created exceptional snowfall on 11 March for the Channel Islands but Reigate got away with 1cm of lying snow which melted in the town quite rapidly and left a day of severe wind chill down to -12ºC at 5am.  Mini snow drifts persisted on the North Downs and Reigate Hill for several days.  Arctic air arrived later on the 12 March as the LOW drifted SE and dragged northerly winds in creating brighter conditions with spectacular cumulus snow and sleet showers through to the 13 March.  Reigate had episodes of heavy sleety rain mid-March and even a clap of thunder (first recorded since Christmas Day!) on 18 March as milder air met colder air creating unstable conditions on complex fronts.  March 23 saw another snow event over the UK: record-breaking snow fall occurred to the NW over the Isle of Arran, Cumbria and Wales but Reigate again escaped the worst with a few cm falling but melting rapidly while a covering of snow lingered for a few days over the Downs.  Cold easterlies then dug-in and pushed dew points to -6°C with temperatures hovering around freezing through to the end of the month.  Dull blanket layers of stratocumulus caused by a persistent isothermal layer at around 900m in the easterly winds brought occasional flurries of sleet and snow grains and severe wind chill but little sunshine.  Temperatures fell throughout the month and Spring was delayed in the coldest UK March since 1962.

Very low dew points (down to -7ºC) show that dry air persisted for much of March.  People with lots of hair to manage may have had a difficult time through March with curly hair going straight or fly-away due to drying out in the low humidity and dry, skin-cracking north-easterly winds.  Low dew points have a bad impact on curly hair, dragging out the moisture from the hair into the dry air.   Whilst dew points in the UK are usually high in our moist humid climate which is good for keeping curly hair curly, anyone with lots of hair to manage should check dew points on weather forecasts very carefully, especially in winter and avoid expensive hair-dos on days with low dew points… just a thought.  More seriously, farmers across the UK struggled with lost livestock in deep snow and delayed sowing of spring crops.  The weather sparked some debate over climate change and the possible causes of the cold which gripped the whole of the northern hemisphere.

very cold across Europe all this week

but warming up from the weekend

Colder than average across Europe

Next week is a real chiller for the whole of Europe. Average temperatures are 6°C below normal for this time of year in the UK.  One reason for the continued cold spring weather is exceptionally high pressure over the North Pole compared to that in the mid-latitudes which is measured by an index called the Arctic Oscillation.  The HIGH pressure BLOCKS out milder air and causes Polar air to flood further south than usual, reaching Reigate on several occasions this winter (albeit modified and warmed up along its journey).

The Arctic Oscillation index is currently “strongly negative”.  This indicates much higher than normal pressure over the Arctic and a weak jetstream in low pressure further south than usual.  Air flows from HIGH to LOW pressure.  This means that cold Polar air can easily push out from the north unimpeded by weak SW winds: hence the cold weather brought by Polar easterlies reaching the UK.  The jetstream also “holds in” Polar air like a belt, but the belt has slipped down well to the south of the UK causing “pants” weather for the UK.  Usually the jet migrates north of the UK at this time of year bringing in milder SW air at the surface.
The question, of course, is not “if” but “when” exactly Spring weather will arrive. The maps and ensemble graph seem to suggest that next weekend could see initial improvements with milder SW air reaching the UK and a break down of the Polar block… let’s hope this proves to be accurate!

East meets west over the weekend

M23 last Saturday…similar to this

The UK will see some heavy snow over Friday and Saturday as Atlantic fronts bring warmer air spiraling round a LOW pressure to the West bumping into the frigid cold Polar Easterlies blasting from the continent. It looks like the big snow action Friday and Saturday wileigate and stay further north and we will just suffer cold rain, possibly a bit sleety and certainly not pleasant; wind chill temps down to freezing and plenty of rain, up to 10mm!  The North of the country, especially over the Pennines, could see record-breaking March snow.

There is a big North-South divide in air temperature caused by subtle but critical differences in source region: the wind in the North and the South is basically EASTERLY in direction but check the isobars over the country either side of the FRONT on the map showing Saturday’s weather. Over Southern England the isobars can be traced back in a long wide arc over Europe originating somewhere over the Atlantic off Spain and Portugal: much warmer than the source region for the cold Polar easterlies emerging out of the Poles and flowing across a still-cold Russia.  The Atlantic air has 850hPa temps of 0ºC to -5C, whilst the Polar Easterlies drop to -14°C or lower (850hPa is air temps at 1500m, commonly used to measure air mass temperature avoiding surface influences).  So Spring air from the west is trying to make a break through over the country but in a very roundabout way!  Sadly, the Easterlies win next week and flood the entire country with COLD air by Wednesday: expect chilly but dry conditions, frosty nights.

Finally, here’s a special TREAT: take a quick look at the latest GFS forecast which shows a distinct rise in temperatures at the end of next week: a sign of Spring at last? Let’s hope so!