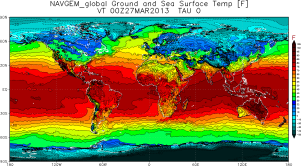 Cold up north… but are volcanoes to blame?

Volcanoes erupt ash and gas high into the atmosphere. A volcanic dust veil injected into the atmosphere can reduce solar radiation receipt at the surface for a few years and lower global average temperatures sometimes by a few degrees.  A cooler atmosphere also tends to sink and create high pressure at the surface, a prolonged feature of our 2013 winter. Finally, sulphuric acid from volcanic eruptions can get into the stratosphere where it is particularly effective at reflecting solar radiation which would induce cooling.  So, volcanic eruptions near Polar regions could produce cooler winters for a few years and several high latitude volcanoes have erupted fairly recently: Kasatochi in Alaska in 2008, Mt. Redoubt in Alaska and Sarychev in Russia in 2009 and Eyjafjallajokull Iceland in 2010.

However, none of these have been terribly big eruptions, Eyjafjallajokull was only VEI4 (volcanic explosivity index).  In fact, this eruption was insignificant compared to super-eruptions of the past which did have a climatic cooling effect: Tambora was 10,000 times bigger!  Hekla in Iceland is rumbling right now but that, along with these other examples, seems too little and too late to be a true suspect in the crime of Spring 2013!