Ice Sheets to High Streets… the arrival of the Queen of Freezer ;-) quick update on chill arriving this week 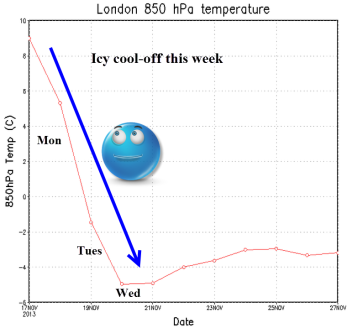 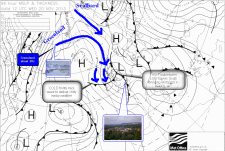 Blast from the North

freezing touch down in SE

The well-advertised cool-off this week arrives in Reigate late Monday and through Tuesday with the coolest days being mid-week: some remarkably cold upper air temps are due to cross the SE this week. While Tuesday will be cold and bright under a brief ridge of high pressure over SE, the coldest feel will be in more windy and damp conditions Weds night – Thurs am.  Whilst this is far from an early winter-Armageddon we are certain to see chilly temps during the day staggering to maybe 5 or 6c Tmax with night temps dropping below freezing: car scraping, road gritting with cold days and chilly nights, if you happen to be out, will be the norm in Reigate from Tuesday on wards, but must stress nothing outrageous, just chilly, especially when wind picks up with arrival of a LOW skirting down from N of Scotland and journeying south down the North Sea mid-week: sticking tightly to the East coast.  This will eventually introduce a COOL POOL low over the near continent which will form the basis of weather in the SE for later this week and into the weekend with cool and, usually gloomy, NE and E winds off N Sea, whilst a frosty HIGH builds over the north of the country.

A meridional (wiggly) North-South jetstream is responsible for dragging down frigid air from the Poles… the distance from the Greenland Ice sheet to Reigate is some 2000 miles, so this Polar air will warm up over the comparatively warm North Atlantic Ocean courtesy of the warm ocean current, North Atlantic Drift. Nevertheless, a series of cold fronts Monday and then again Weds will introduce successively colder air from N-S down the country, with accompanying rain (snow for north and northern hills).  These fronts will also bring down rain, occasionally “icy” / sleety mid week, possibly with dusting of snow too for higher ground locally.  The complicating factor in this Arctic plunge scenario is a vigorous area of LOW pressure regressing down the North Sea, driven by the northerly jetstream, which has some cold polar air from Greenland wrapped into the circulation.  The North Sea is about 9c so this will have warmed up considerably since its departure from the Ice Sheet but the warming from below could invigorate wintry showers for the East coast. The GFS model has the additional possibility of the cold front dusting the SE with snow overnight Weds into Thursday am as this cold air sweeps over and freezing levels touch down on the Downs. As usual, check back for updates as this interesting wx takes shape this week as models are hinting at further COLD for next weekend. Follow @RGSweather on twitter too!

So, prepare for the arrival of the Queen of Freezer!