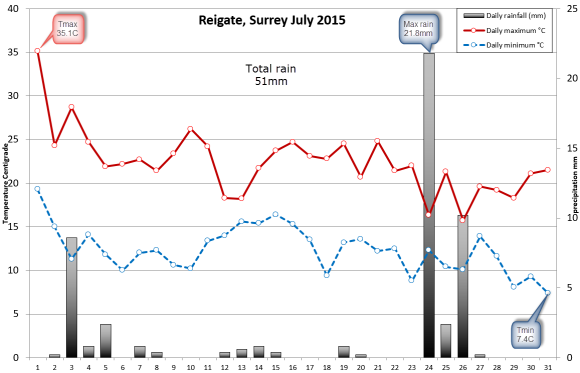 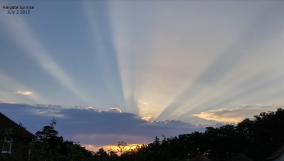 July 2015 in Reigate started hot, reaching 35.1C on July 1st due to a Spanish Plume.  The first day of July broke the record for the hottest July day when Heathrow spiked at 36.7C as cloud cleared around the airport allowing sunshine to heat the surface through an already very warm airmass.  This caused a heat spike at Heathrow and elsewhere that allowed the MetOffice to announce 1 July 2015 as the “hottest July day since records began and the hottest day since 2003”.  This set climate / weather data skeptics in a whirl as they spotted that the nearby Kew Gardens weather station did not correlate with the same heat spike at the same time allowing them to claim it was simply due to hotter local conditions from the local airport tarmac, a change of wind direction or even heat from a passing plane.

The photos below show the locations of the Heathrow weather station adjacent to the Northern Perimeter Road west and the Kew Gardens weather station.

In response to the doubt, Mark McCarthy, a climate scientist at the metoffice, was quoted in this article explaining that the heat spike was neither due to passing aircraft, nor a change of wind direction or any micro-climatic influence from tarmac and that the temperatures from Heathrow are representative and so the record stands.  In discussion with RGSweather on twitter, Mark also explained that the last 10 years of daily Tmax observations from Kew Gardens and Heathrow differ only by <0.03C on average.  This debate was akin to the wider global warming debate where met agencies present data that is then questioned by skeptics who present data that appears to contradict the claim. In any case, July 2015 started hot!  Unfortunately, July temperatures then promptly collapsed across the UK and the CET came out around average as westerlies returned from an anomalously cold North Atlantic.  Despite a lack-lustre July in the UK, globally, July turned out as the hottest month ever recorded.

Reigate and the SE had an average month being just nearer the European heatwave that dominated July.  Overall the monthly temperature came out a tad below the CET long term average, continuing a run of 3 cool months.  Further north and west July became a decidedly cool wash-out, especially in Scotland where snowfall occurred over some mountains.  Night time minimums were cooler than usual and some records were broken for lowest ever July night time minima.  In Reigate we recorded a Tmin of just 7.4C at the end of the month.

July 2015 more unsettled to the end 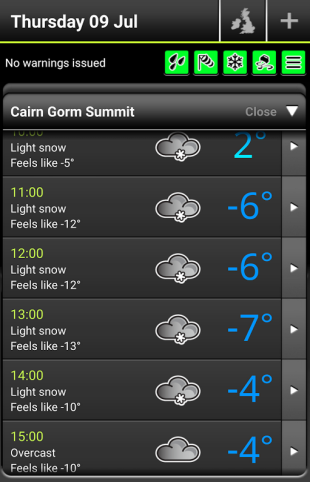 Here are metoffice anomaly charts showing how Reigate and the SE stayed warmer and drier than elsewhere.

SE rainfall overall came out above average mainly due to thunderstorms delivering locally heavy precipitation.  Reigate at 51mm came out nearer average because most heavy rain missed us. Although not local to our area, a thunderstorm over the Brecon Beacons in early July killed two people on top of Pen Y Fan and Cribyn.  The photo below shows this thunderstorm. 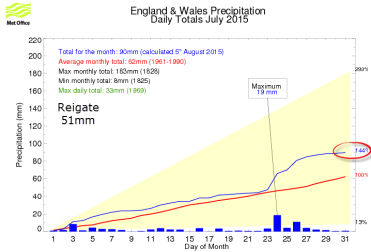 Globally, NOAA and JMA (Japanese met agency) reported that July 2015 was the hottest month ever recorded.

More from the metoffice on JUly 2015 here: http://www.metoffice.gov.uk/climate/uk/summaries/2015/july