High pressure has dominated the last week of our weather but it has turned out disappointing here due to cloud cover lingering under a persistent temperature inversion, not unusual for this time of year.  Lingering decaying fronts have caused drab stratocumulus cloud to spread out beneath an anomalously warm upper air mass causing anticyclonic gloom for much of the SE.

Any convection has been limited to the lowest 1km and been unable to break the inversion, so cloud, unable to rise into cumuliform tufts associated with the stronger sunshine in April, simply spreads out into a boring grey blanket, especially when the flow arrives from the North Sea bringing additional moisture in the lower layers. An inversion is when temperatures increase with height through a part of the atmosphere, usually referring to a lower layer.

So, whilst upper air temperatures have been anomalously warm, the surface temps have been kept disappointingly low.  Somewhat “upside-down” weather.

This is because the Spring sunshine has been unable to break through the cloud and warm the surface.  The exception has been the north and west of the country, especially the hilly parts of Wales and NW England, which have enjoyed more sunny days. 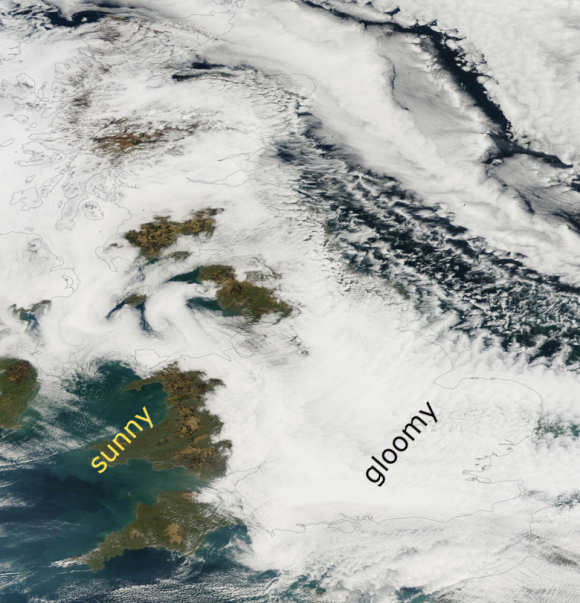 Today it was the turn of the E/NE coast to get the sunshine as weakening fronts shifted south around the high.

The coming week sees the HIGH slowly deflating, like a sad party balloon, into the sub-tropical Atlantic.  A couple of powerful late winter storms emerging out of the NE US and Newfoundland start the onslaught to break a westerly unsettled flow back across the Atlantic by Easter.

A return to more mobile frontal conditions is not all bad news, especially in the SE.  A westerly flow with weakening Atlantic frontal systems will break the gloomy cloud cover and bring sunny intervals and showery episodes to clear the pollution phase we have experienced lately.  The risk for us is any fronts stalling over the SE in front of a European HIGH – this situation can dump fairly large amounts of rain. Chart below shows wind speed and an active cold front for Sunday, too far off to be reliable but worth watching.

The multi-model charts below show this change from HIGH to LOW during the next week. 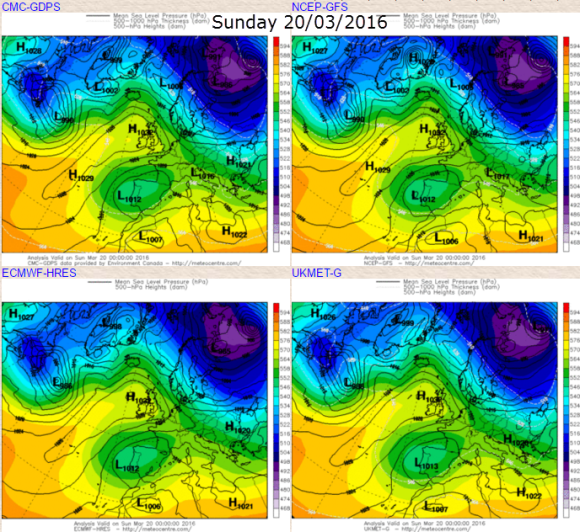 Note the model agreement below by Saturday for SW winds, bringing temperatures up possibly into the mid-teens in the SE.

In short, we can expect the weather to turn the “right way up” again and we should enjoy more mobile, fresher, brighter conditions, albeit with breezy episodes of potentially heavy rain at times. The charts below show temperatures rising in the SE but rain returning by Friday.

Further into April there are hints that pressure rises across the Pole which will bring the potential for further unsettled cooler conditions during the school holiday period. RGSweather is off to Iceland (East fjords) again so this could mean some nice cold conditions for our trip there as the AO is expected to turn negative and the flow northerly, at least for the N Atlantic.  The UK appears to get stuck in an unsettled trough for early-mid April. Worth watching as JMA and CFSv2 both agree on this blocked pattern. 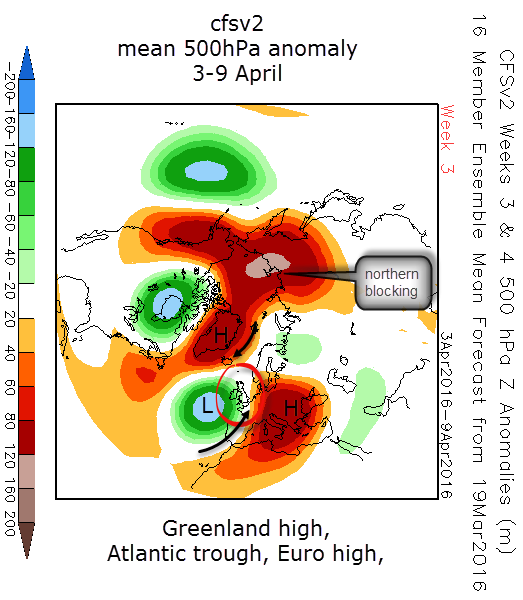