After a pleasant dry and sunny day in the SE, the satellite photo from this evening spells trouble ahead for mid-week with a deep depression over Iceland and an increasingly active Atlantic with a long frontal boundary trailing across the ocean into thick bands of cloud.

Reigate and the south of England are set for a potentially very wet day on Wednesday as shown on the Euro4 chart below showing just 12 hours of rainfall during the morning. 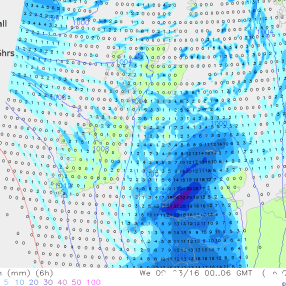 Unusually high rainfall totals could mount up, possibly to around 30mm for the day on some models. However, models usually exaggerate rainfall totals but it is likely to be soggy! 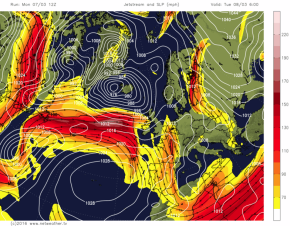 develops LOW to S of UK

A strengthening Atlantic jetstream is causing the convergence of moist sub-tropical and polar air at the Polar Front over the Atlantic Ocean.  The winds can be seen converging on the Atlantic chart below.

The convergence of Polar and Tropical airmasses can also be seen on this chart showing the trajectory of winds arriving in the UK on Wednesday.  Note the surface tropical airmass circulates round the Azores high and meets the incoming Polar air from Canada.  It’s the less dense moisture laden maritime tropical air which is lifted over the cold, enhancing rain on frontal boundaries. 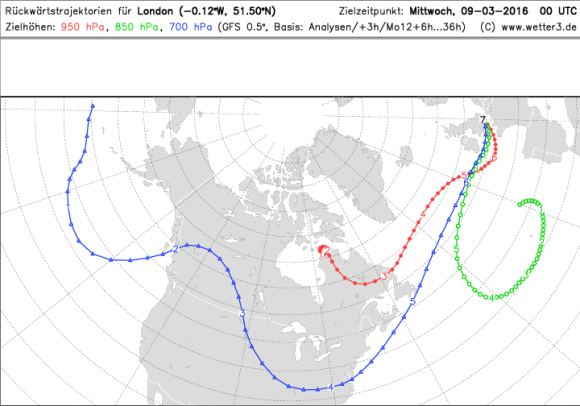 The 850hPa (15oom) temperature chart below shows the steep temperature gradient between contrasting airmasses across the Atlantic.  The water vapour Meteosat satellite picture shows a broad sweep of moisture laden air crossing the Atlantic from the Sargasso Sea.

The boundary of the contrasting moist Polar and humid Tropical airmasses causes lift and this is set to rapidly form a depression over the UK later on Tuesday into Wednesday courtesy of a jetstreak to the west of the UK. 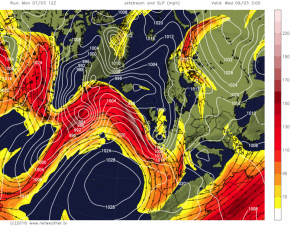 Large amounts of Atlantic moisture are set to converge in this low pressure as airmasses meet at frontal boundaries.

The result over SE England is an unsually steep rise in dew point to 6-7C, indicative of increasingly moist air. 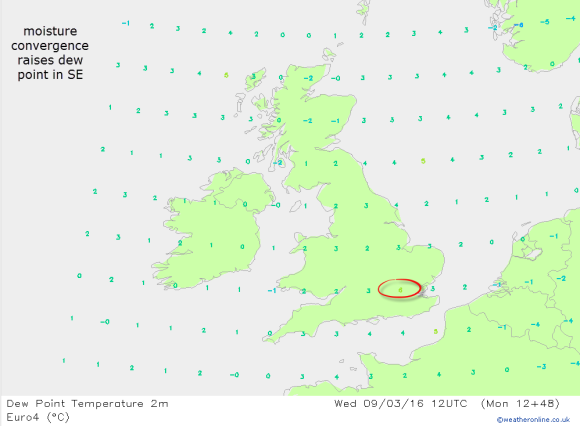 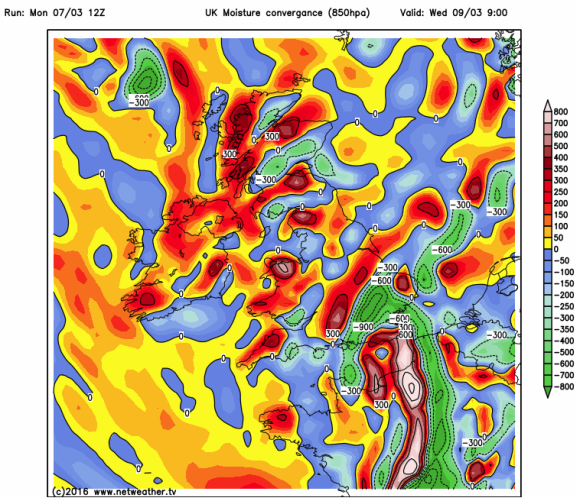 The atmospheric column looks to become exceptionally moist on Wednesday and saturated through to a height of 25,000 feet.  Cloud depth will make it a very dull day.

Rainfall charts look impressive and, at the moment, show the rain arriving on Wednesday morning. Here is a medley of rainfall charts from 3 different models showing the potential for a deluge, though do note that models tend to exaggerate these totals this far out.

The 6 hourly total chart from GFS shows an extraordinary 26mm over parts of SE on Wednesday morning.  This would lead to local surface flooding on roads.

Note this is not a convective event so no thunderstorms are likely, which makes such high rainfall even more unusual. It could be the biggest daily rainfall total for quite a while, over 36.6mm of rain in a day was recorded on 24 August 2015. Keep posted on twitter and check MetOffice forecasts for updates if travelling.  Some disruption could occur if this comes off as models suggest.  Milder and settled conditions are expected into the weekend after our mini-monsoon! 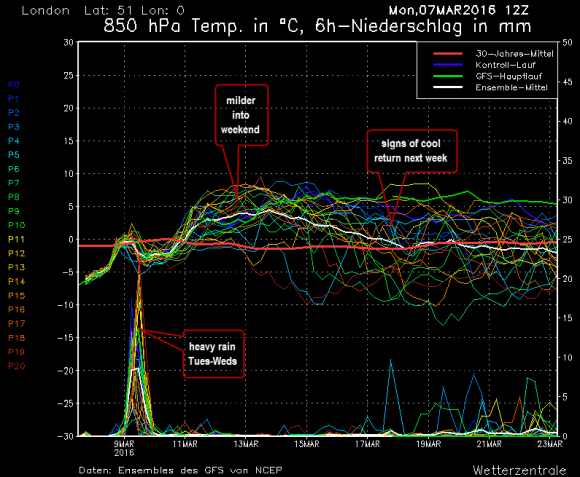