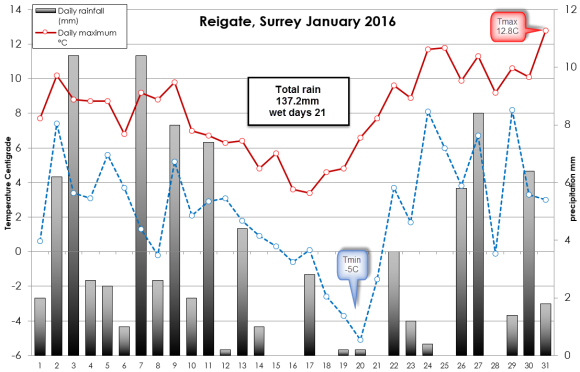 January 2016 was a modestly unsettled month in Reigate with frequent wet days (21 in total with >1mm) and total rainfall amounting to 137.2 mm, this was some 160% of normal expected rainfall totals for the SE as a whole for January.  This caused some surface water flooding and soggy fields but, whilst a few flood alerts were issued, the River Mole behaved itself as no one rainfall event occurred with sufficient intensity to cause significant flooding problems in the Mole catchment. 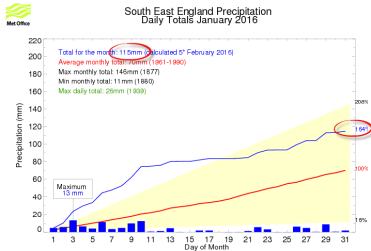 In comparison with recent years, January 2016 turned out moderately wet sitting between the very wet January 2014 183 mm and the drier Jan 2015 69mm.  Of note locally was a spectacular display of mammatus cloud on 10 January as a squall line brought a thundery trough that passed over the area bringing some hail and cumulonimbus cloud.

It was a mild month with average temps 5.2C, Tmax 12.8C and only 7 days with minimum temperatures dipping to or below freezing. The highest January max temp ever recorded occurred in N Ireland. Whilst no weather record was broken in Reigate it was still a mild month with about average sunshine.

At 5.4C the CET temperature for the UK was 1.6C above the long term average. At 1.13C the global average January temperature turned out to be another record breaking warm month. 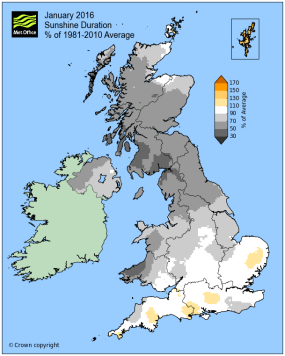 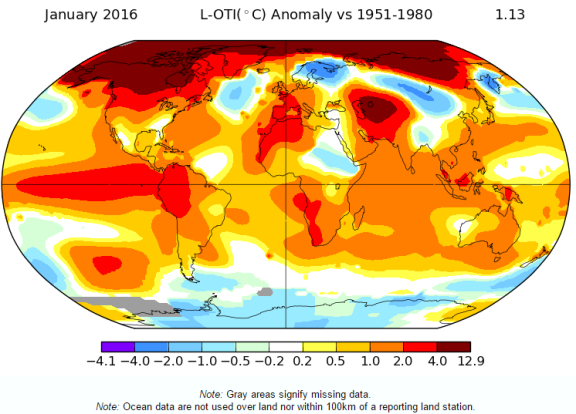 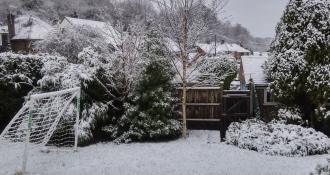 reaction to snow in the UK

Snow lay during the morning of 17 January and was just sufficient to allow families to enjoy sledging and snowman building in Reigate and Priory Park for a few hours before it all melted by midday. 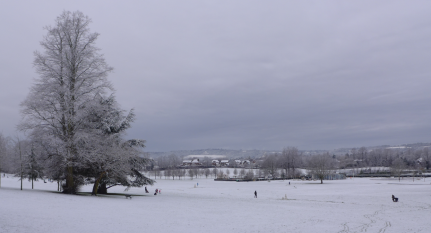 The mean 500mb pressure anomaly pattern for January shows the UK in a mostly stormy Atlantic regime with storms rattling through especially the NW bringing high rainfall totals there. Storm Gertrude at the end of the month did not impact the sheltered SE much. As usual the SE was relatively protected sitting nearer the higher pressure over S Europe. 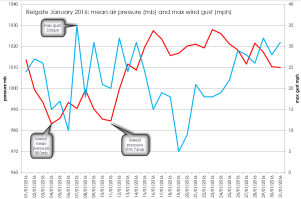