Imogen is the ninth named MetOffice storm this winter.  She formed in the Atlantic in an area of steep temperature gradients under control from an active jetstream. 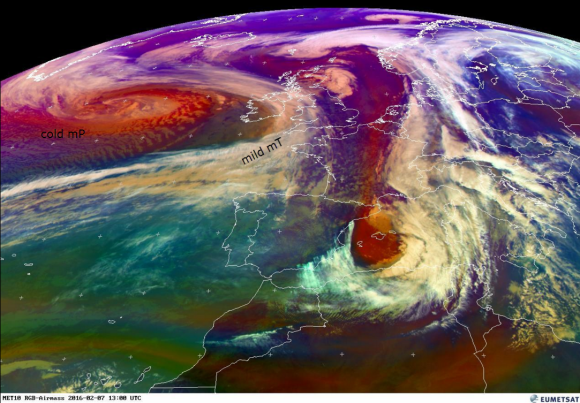 Storm Imogen is deepening rapidly today to 953mb, though on arrival in the UK she will be occluding and filling gradually to above 960mb on her track over N Scotland into the North Sea on Monday. The exact track makes a big difference to where the strongest winds are.  Current trends are for the storm to pull wind fields further north so impacts could be less than expected. Keep an eye on the MetOffice forecast as things are likely to change. Below is an outline of Imogen’s likely activity:

Unlike the previous eight named storms, Imogen has a more southerly track, guided by a more southerly tracking jetstream, and the field of strongest winds and heavy rain are possibly set to impact the densely populated southern part of the UK, including the SE. High waves are also expected on the Channel coast. 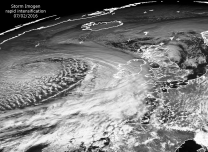 On Monday gusts up to 80mph on the Channel coast are possible, while inland the MetOffice consider 60mph possible in exposed places.  Around Reigate and sheltered parts of Surrey, 40-50mph gusts are more likely.  The North Downs could see gusts approaching 60mph. The strongest winds for the SE are likely to be through midday and in the afternoon.

Yellow warnings apply to inland parts of Surrey and SE England while the entire Channel coast has an Amber MetOffice warning. The first impact will be frontal rain tonight.  Fronts passing through overnight into Monday could drop over 20mm of rain in places particularly linked to the occluding “triple point” forecast to cross the SE overnight. 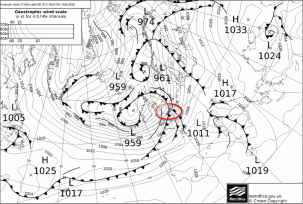 Monday is likely to see showers, some heavy, appearing through the day.  Warm sea surface temps in the Channel are likely to cause more on the coast but the brisk winds could bring them inland as the day progresses. 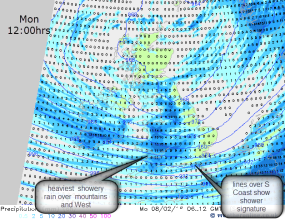 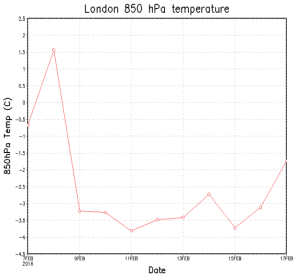 On Tuesday models show a wave depression bringing more rain to the SE, some even show fleeting wintry precipitation on the back end of this low as colder air ingresses from the north.  This is unlikely to be significant, at least on Tuesday, as upper air temps remain mostly too high for snow in the SE.

Colder conditions are preferred by the ECM as northerly winds bring cool polar air further into the country through mid-week.  The Arctic Oscillation is again going negative which shows pressure rising over the Poles trying to push Arctic air south into mid-latitudes.  However, the NAO remains positive so Atlantic depressions will continue to bring frontal depressions for this week.

The 8-10 day mean shows a deep trough over the UK meaning low pressure and unsettled conditions remain likely into half term. 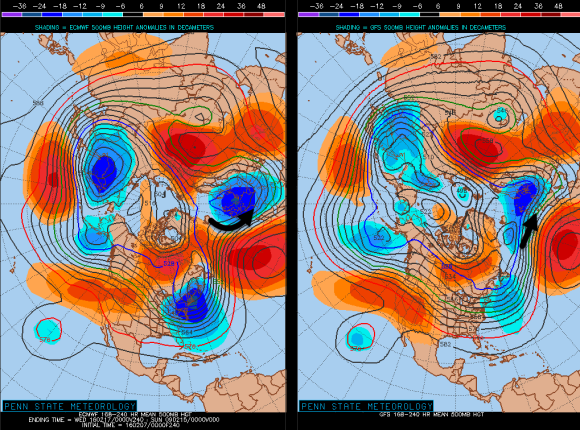 The ECM builds heights over southern Greenland which links with higher pressure over the Atlantic, a more northerly feed of cold polar air is likely in this scenario into half term . The ECM has been outperforming the GFS so the more Atlantic driven GFS chart would be the less favoured option. 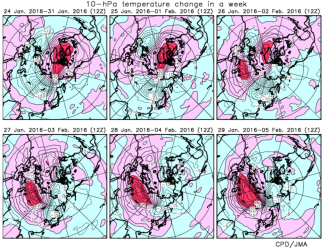 The Sudden Stratospheric Warming going on over the Pole is another astonishing feature of weather at the moment.  Today (Sunday) temperatures in the stratosphere over Siberia has got up to an amazing +12C from a more usual -70C.  SSW events often build pressure over the Polar troposphere a few weeks later which can cause cold incursions into mid-latitudes.  This is by no means certain but is perhaps our last chance of any sustained cold this winter… if it were to happen it would be late Feb/March. One to watch!