October CET temperature came out just above average at +0.4C. Significantly, globally, October 2015 was the warmest October ever on record for this month by a significant margin, probably due in part to a strong El Nino.  In fact every month of 2015 so far has been record-breakingly warm and each month has been the warmest recorded anomaly… since 1880.

In all of recorded history, no month has been as warm as October 2015…shockingly intense new climate. pic.twitter.com/TC3mG20uWx 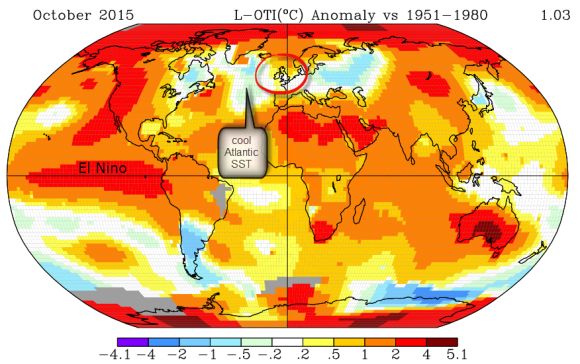 Due to anomalously high pressure for much of the month, South East England rainfall was lower than average at some 76% of the long term average.  In Reigate this amounted to 61mm of rain.

Despite the high pressure sunshine amounts were average or slightly below in the south east with Reigate totting up 95.3 hours of sunshine in the month.

October is sometimes correlated with winter outcomes. Anomalously high pressure in October has sometimes been correlated with cold winter patterns, though this is highly experimental.  In addition, October Siberian snow cover expanded rapidly and beyond the 2014 cover for the same period.  This got winter forecasters further interested in the possibility of high pressure, northern blocking and the increased potential for a cold late winter in the UK.  However, seasonal forecasts have a habit of going awry, as was illustrated by the ill-fated “October Pattern Index” much heralded in the run-up to winter 2014 when it predicted a cold one. The OPI, as far as I can tell, has now disappeared off the seasonal forecasting scene completely.