#Reigate eclipse weather potential… will we see it?

Most models currently forecast HIGH pressure ridging in from the west by Friday.  Update Sunday 00Z run: shows more agreement.  ECM has been out-performing other models recently so this might prove to be most accurate: high edges in from west, cool N/NE flow, then pressure falls by next weekend as HIGH regresses back west allowing spell of cool northerlies. 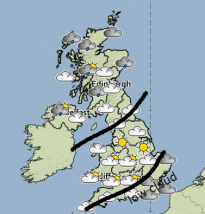 low cloud SE, but clear above

Latest charts show clearest view over Midlands/Wales/N England… SE is hanging on to lingering cloud from a shallow LOW passing south into France from N Sea, this will enhance cloudy N/NE winds through Thursday.  Cloud should be clearing from the North quite quickly during Friday morning so hopefully it’ll hurry up and so by 9.30am!  It could turn out to break quite suddenly with little high and medium cloud above to hinder views thereafter.

If this forecast comes out then the weather looks reasonably  iffy! (update Mon: dirty high : lots of cloud, especially in east nr North Sea coasts) for chances of catching a view of the partial eclipse passing over the UK. Latest chart for Friday am from UKMetOffice shows a band of cloud / light rain moving S/SE during the early morning over SE England.  Further west and north and away from east / SE coast currently looks more promising for seeing the eclipse.

The partial eclipse peaks around 9.30am for us in Reigate and the SE.  Details of local cloud cover are not reliable at this range especially circulating round a high pressure such as this.  So, if a view is important to you, continue to check professional forecast providers carefully throughout the week.  On Thursday our student RGS weather team will be putting together a video weather forecast for the eclipse for a BBC School Report so please check back then for details!

Reminders: never ever look at the sun, even in an eclipse (check here for methods of viewing).  Also, without taking away any of the excitement and value of viewing and understanding this awesome spectacle, let’s check the comment from our expert friends at Meteorwatch so we know what to expect… 🙂

OK, back to the weather… the GFS chart below shows the current synoptic situation: a Scandinavian HIGH pressure is bringing cool, dry but mostly cloudy easterlies through this weekend.  A weakening front from the continent will bring cloudier wetter conditions on Sunday and cloud could linger on Monday as pressure ebbs away slightly.   A lighter southerly flow looks to warm and brighten things up by mid week and it should stay dry.

By Friday, eclipse day, the HIGH over Scandinavia is forecast to ebb south and melt away to be replaced rather quickly by a LOW pressure over Scandinavia.  At the same time, the GFS shows the Azores HIGH building a ridge from the SW.  The GFS and GEM has this anticyclone building somewhere to the W/NW or even over the UK by Friday.  The exact position and strength of the HIGH will determine wind direction and cloud cover.

The ECM chart below puts the HIGH further west and introduces a purposeful northerly wind with a hint of a cold front moving south down the N Sea during Friday morning.  Though the ECM is on its own with this it is worth watching as this could be a spoiler for those wanting a view of the eclipse.

The GFS Atlantic charts below show a ribbon of cloud stretching the length of the total eclipse path, roughly between Iceland and the Faroes and Svalbard.  This ribbon of cloud is associated with a humid SW air stream and frontal cloud ahead of low pressure nudging into the HIGH from Greenland.  If this HIGH pressure comes off as shown below then the UK could well be the best location to get a relatively cloud-free view of the partial eclipse.  Unfortunately the charts show that views along the path of totality through the Faroes might be less clear, but it’s early days and cloud forecast charts are notoriously flakey!

The position of the HIGH to the west / NW of the UK will bring in North or NE flow through the North Sea and into SE England.  Such a flow will be cool and places near North Sea facing coasts might risk low cloud off the sea or even fog early on.  Fog may not ruin a view of the eclipse and could add to the mystery but lifting low cloud might spoil things of course.  Eclipses can influence cloud cover and shape, so watch for any subtle changes to cloud as the eclipse occurs. Reports to NEWEx welcomed by Reading University Meteorology Department. 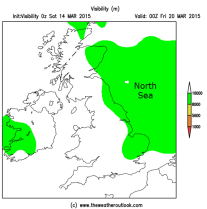 Temperatures you experience if out viewing the eclipse from 8-10am will vary locally depending on sunshine(!), cloud cover and fog and exposure to the N/NE breeze. Temperatures first thing are cool 2-3C but should climb to 8-9C, though a dip of 1-2C is expected during the eclipse.  Windchill is likely to be a factor near coasts and hills. 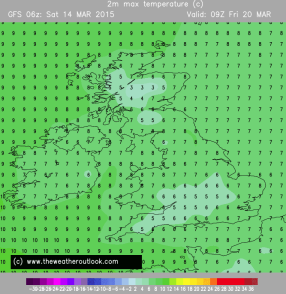 So: exact details tricky to pin down: but the outlook seems reasonable for seeing the eclipse in Reigate on Friday morning.  The risks will be if the N/NE wind picks up and drags in low cloud from the coast, which is quite possible; or if the ECM chart comes off that cold front pushing down the North Sea could be a spoiler too.  However, the overall pattern looks to be optimistic.  Updates nearer the time and please check back to view our student video forecast on Thursday! 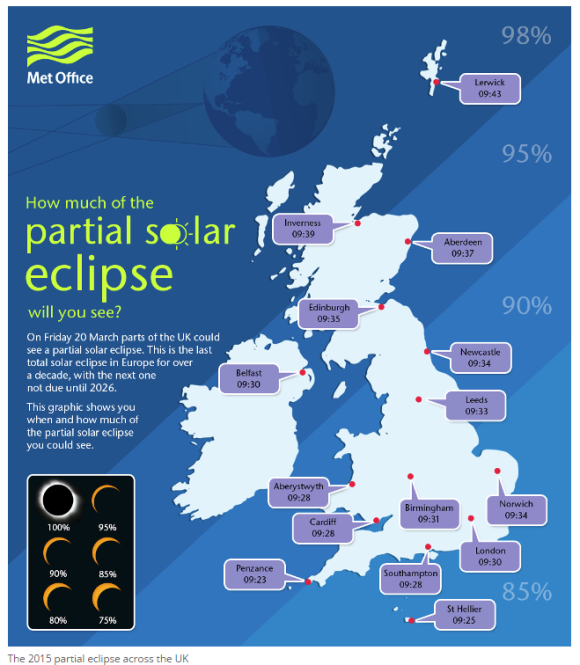 eclipse in the UK

One response to #Reigate eclipse weather potential… will we see it?