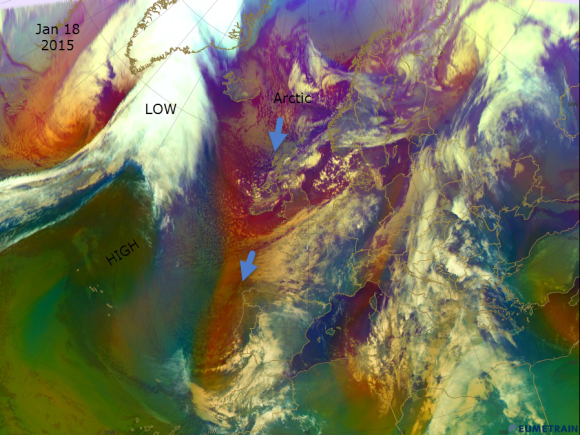 Update Tues pm: system not bringing any significant snow to Reigate, Midlands north might see accumulations but even this is not likely to be disruptive..  The satellite image above shows water vapour and airmasses.  Notice how tropical (blue!) and Arctic (red/mauvey) airmasses are intruding across latitudes – plunging respectively north and south of their source regions.  Cold Arctic air is reaching right the way down to Spain.  Here’s a look at what is going on and how things might develop for Reigate and SE UK especially this week.  Overall things look cold and wintry and there is a slim possibility of snow for us but it’s worth watching the forecasts and twitter updates because it’s very marginal and things can change locally quite quickly.

The Arctic air arriving in London Monday left the Kara Sea a week ago. This Arctic air is arriving over the UK courtesy of a high pressure ridge over the Atlantic and Greenland / Iceland which blocks mild maritime air in the Atlantic from reaching the UK. A low (the remnants of storm #Rachel) over Scandinavia is dragging down cold northerlies assisted by a northerly jetstream aloft.  This set-up makes this week the coldest since March 2013 and, as some light snow fell in Reigate this morning (Sat 17) then that was the first snow fall here for 2 years.

The result of the pressure pattern is airmass temperatures lowering at 850hPa to -7C or lower over the course of the next 48 hours due to the steady invasion of Arctic air. Overnight tonight into Sunday morning a front in the Channel could bring light snow showers to southern England early Sunday morning.  The situation is “marginal” as the truly cold air has yet to arrive in the south and dew points are hovering around or above freezing tonight which can make a difference between whether it snows or rains. 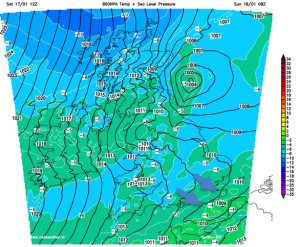 Over Sunday the Arctic air will arrive and the upper air mass temperature at 850hPa (1500m up) will fall from -4C to -7C by Monday.  In such a cold airmass the surface air temperatures on Monday will struggle above freezing during the day to about 3C and wind chill will make it feel colder.

An important threshold for snow is an upper air temp at 850hPa of -5C or lower.  So from Monday any precipitation might fall as snow, so long as other factors are in place.  The chart below shows the movement of the Shetland low into the N Sea and eventually further south which ushers in northerly winds.

There is reasonable model agreement as to what will happen into mid-week but uncertainty thereafter as to how long any cold will last.  High pressure is set to build over Scandinavia blocking the NE track of a low S Greenland.  A trough disruption is set to occur when the LOW near Iceland splits from the main trough and slides down the edge of the Atlantic high and sinks SE over the UK (called a slider low).  Trough disruptions are notorious for causing models problems with accurate forecasts!

The slider low will bring attendant fronts with milder air mixed in, thus complicating chances of widespread snow and making forecasts tricky.  Tuesday is the first chance of any snow this week for the SE as a front moves in from the west to reach the SE around the afternoon, though details this far out cannot be certain.  As the front moves into colder air the rain could turn to snow, especially on the back edge as overnight temperatures fall.  It is very likely to be snow across the middle of the country and certainly over high ground but snow for the SE is less certain, it could be just sleety or rain depending on the mix and location of mild air from the south in the occluded front. In any case Tuesday looks light precipitation as the front weakens to the east.  This doesn’t help snow formation in marginal situations because less cold air is dragged down from aloft in light rain and there is less evaporative cooling in light rain.

snow on back edge?

Charts currently show that Wednesday has a better chance of snow action for the SE as another front, this time with heavier rain, clears east later on Wednesday or overnight into Thursday.  Exact timing is uncertain and indeed the development of this might all change despite there being sound model agreement as to the overall synoptic situation into the mid week period.

back edge with snow

The latest UKMET chart for Thursday shows the SE in a COL between HIGH pressure SW and NE and LOWS NW and SE. This looks like a cold wet day with sleet for Reigate, but snow is again possible, especially as the LOW drifts south and introduces a cold NE continental flow for a time on the northerly edge. This is most likely to restrict to inland areas or those higher up locally but it needs watching carefully as heavy rain might tip over into sleet then snow due to evaporative cooling.

After mid week things look like turning somewhat milder for a while as westerly winds eventually break through properly, possibly by late week or the weekend.  This means snow chance reduces to nothing as milder Atlantic winds return.  Nevertheless, the long range models still show some propensity towards building further chilly Arctic incursions later too.

leap up to mild?