#Reigate…can’t stand the pressure? How much more nice weather?

High pressure persists this week over the UK as shown by the chart and the amazingly clear satellite pic showing great swathes of clear skies over a remarkably snow-free Europe today 11 March. It’s worth remembering that on this day last year we saw the lowest wind chill temps of the year in Reigate at -11.9c early on 12 March with -10c at 9:30am on 11 March during an episode of extremely cold NE winds which brought a blizzard to the Channel Islands.

2014 clear and dry over Europe 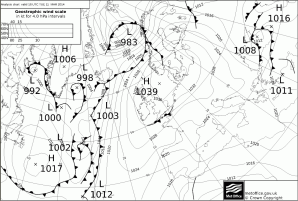 due to massive HIGH pressure across the UK and N Sea 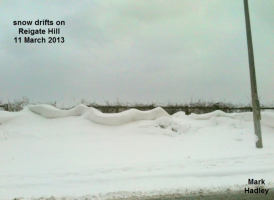 Back to this week… the high pressure has brought delightfully sunny days and Tmax temps to Reigate over 19c last weekend , especially warm and spring like on Sunday. Since then a cooler NE/E breeze around the edge of the high as it slipped north and east has kept us cooler and occasionally more gloomy with anticyclone gloom and stratocumulus blanket on some days. 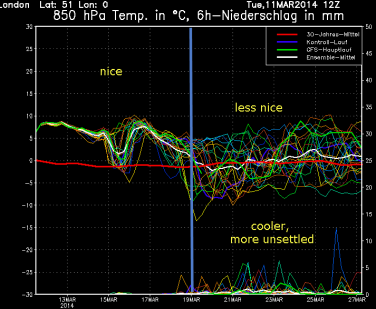 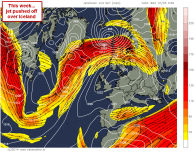 next week has a cooler NW flow 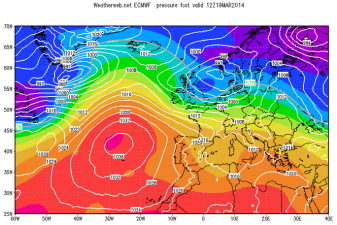 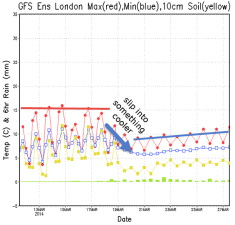 The outlook this week remains settled but with a distinct drop-off of temps over the weekend and especially into next week.  This is due to the HIGH slipping west and the jetstream dragging down cooler NW winds fresh from Greenland.  A LOW moving across N Scotland and over to Scandinavia this weekend will start the process of dragging down NW winds that will make next week cooler, especially further east where it looks like the N Sea will get a full blast of chilly air at times.

Nevertheless, it is unlikely to become terribly unsettled down here in the SE as the longer term picture looks like high pressure hangs on in the south keeping us mostly dry.  The north of the UK might see more frontal action as LOWS bring fronts across more northerly parts.  Models seem to be keeping the south relatively dry for another week to 10 days.

After the wettest winter on record, groundwater levels in the chalk aquifers are the highest EVER in the SE and the Mole Valley particularly.  There are still 50 flood warnings in the SE and locally flood water continues to pour across the A25 between Reigate and Dorking near Brockham.  This groundwater flooding, though of course nothing like as damaging as the fluvial river flooding during the winter along the R Mole and the Thames, could last for some months yet as the winter rain continues to percolate into the chalk water table and flows out along geological boundaries at inconvenient locations such as normally dry river beds and bournes and across impermeable surfaces such as roads. The map showing soil moisture below shows how wet the soil remains after this extremely wet winter. 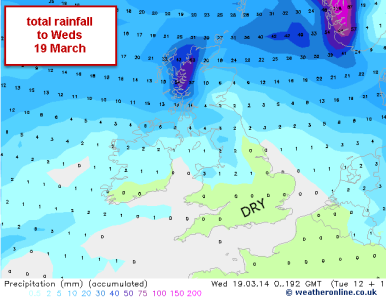 dry in the south for the full run 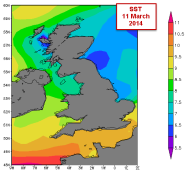 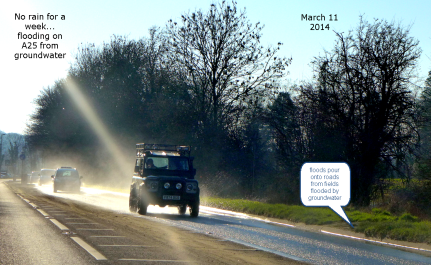 groundwater flooding on A25 Brockham 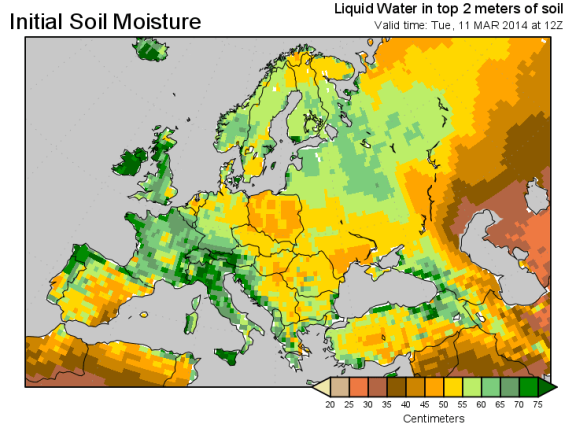