After another big “50 year storm” battered the SW and south coast today, the weather next week unfortunately looks to continue very unsettled with the possibility of stormy conditions at times, especially for the South and west.  Reigate, though more sheltered than most, will not escape the action. Mid-week Tues/Weds sees a likely cold snap with a chance of snow mainly falling over high ground to the NW but also snow showers possibly falling anywhere, albeit briefly and probably not reaching the SE. Before all that, let’s do a quick review of the interesting weather today…

In Reigate there was some interesting weather to report today as an unstable brisk SW airflow picked up moisture from the Channel and built cumulonimbus cells that rolled up to Reigate in the morning… see below:

windy across the UK…

In Reigate gusts peaked at 39mph, more widely gusts reached a measured 43.5mph on N Downs and exceeded that elsewhere to reach 50mph in places. The SW and coastal areas had gusts well over 70mph. In the morning some well developed cumulonimbus thunderstorms rolled across the area and produced hail and some lightning around Reigate, Dorking and Guildford. During these storms downdrafts caused temperatures to drop sharply but also the pressure to rise locally.  Now, let’s look at some charts for next week… 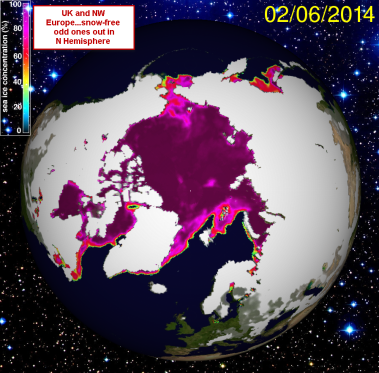 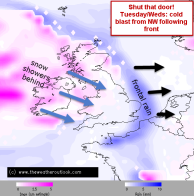 It’s worth noting that the Northern Hemisphere is exceptionally cold and snowy this year… except for UK where it is exceptionally stormy and wet!  There are signs that things will calm down after this coming week as pressure creeps up.  This week, however, looks a little rough, windy, wet and unsettled.

Models are still battling with the precise intensity and track of storms next week. ECM wants to bring in a southerly tracking rather intense low with some big gales through the South and the Channel prior to opening the door to a cold plunge of NW winds fresh from Greenland on Tuesday / Weds. The NW is not the usual direction for country-wide snow, at least not in the sense of prolonged bitter temperatures like 2013 but this particularly unstable polar maritime airmass is being delivered direct from Greenland/Canada and has some chilly upper air wrapped up in a low pressure behind an active front that will cross the UK through Tuesday and drop plenty of rain / sleet /snow. It’s the air behind this front that may bring snow.  Whether it reaches SE is not certain, but the fridge door will not stay open for long as a bigger Atlantic storm sets to arrive at the end of the week.

modelled gales are big, at the moment

Finally, at the end of the week there is a sting in the tale… another almost identical storm to this weekend appears on the scene on Thursday and runs through Fri/Sat.  Some models (GFS) show extraordinary wind speeds for inland at the moment but often they over-do things at this early stage and they usually calm down nearer the time. Lots of interest this week so watch this space for developments.  As weather is so fast moving our twitter feed is the place to get best up-to-date info. @RGSweather