#Reigate most ingredients set to cook up a possible Thundery Thursday! 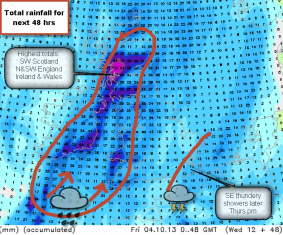 Thursday west gets it 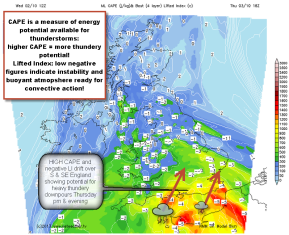 SE gets convection and thunderstorms 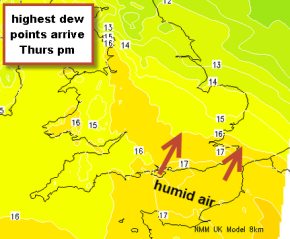 Heavy rain alert and UKMO weather warning issued for Reigate and SE Thursday 3 Oct from afternoon and overnight through to small hours Friday.

An unstable plume of warm moist air will edge across the SE during Thursday afternoon and bring the potential for heavy rain as fronts provide lift to the air to produce possible thunderstorms through Thursday pm and evening.  Rainfall totals from showery outbursts will vary a lot locally, probably most further towards the south coast and further east, but could be as high as 20mm over the 24 hour period almost anywhere in S and SE corner during this time; most places will see a lot less, 6-10mm being widespread.  Winds will be 15mph initially from the SE but in heavy showers gusts could reach 25mph. The wind will veer to the S overnight. It will be increasingly humid during the day with Tmax of up to 20c, staying rather warm overnight but cooler and much brighter on Friday at 17c as cooler polar air follows the cold fronts with a few showers lingering as fronts move away leaving a brighter showery day.

Many ingredients for producing decent thundery activity are met during this period: including… 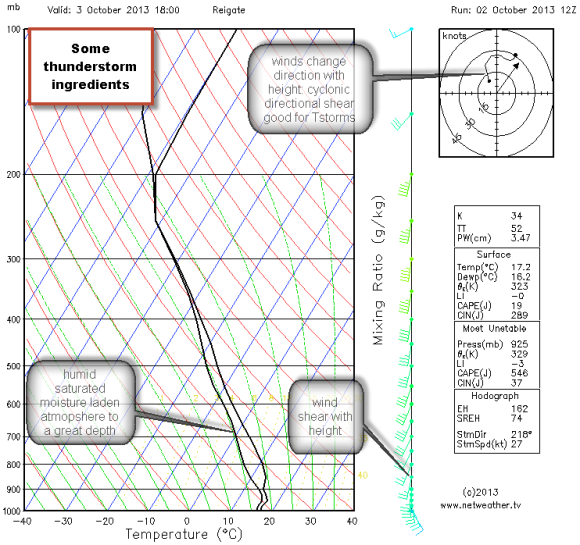 some ingredients are good to go