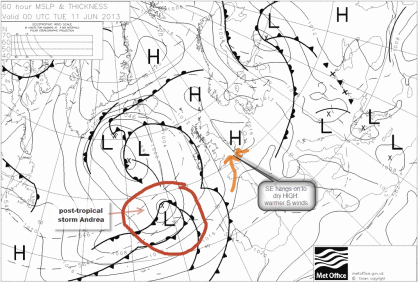 Ageing Andrea on the attack

dry over Europe at last 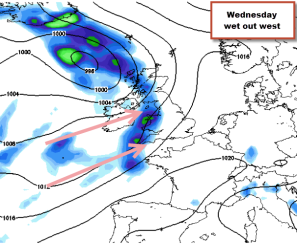 dry hangs on in East 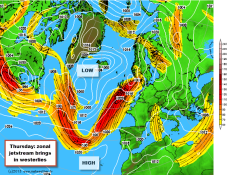 return of the jet

wet end of week for SE

Post-Tropical storm Andrea arrives in the Atlantic this week and sets the scene for a significant switch back to a more Atlantic dominated weather pattern (called “zonal”: where a stronger west to east flowing jet stream brings in Atlantic weather from the west). Andrea is the first tropical storm of the 2013 Hurricane season and soaked the east coast of the USA from Florida northwards last week.  Her arrival in the Mid-Atlantic coincides and perhaps helps to nudge our weather back to a more “zonal” flow and a positive North Atlantic Oscillation (HIGH over the Azores and LOW over Iceland = “normal”!). Andrea is ageing and much-weakened since thrashing the US east coast.  Whilst she is unlikely to storm ashore by herself, she is set to merge forces and deepen a slack LOW in the Atlantic and gather strength ready to sweep fronts across the UK, especially the NW which will get most of the rain this week.  The “Andrea” system will arrive in SE England on Wednesday with windy conditions as isobars tighten.  Reigate and SE is likely to escape the worst of the rain, at least early in the week, as HIGH pressure builds, at last, over Europe (giving them a drier week after record breaking floods and rain in Germany, Austria and Czech Republic). update Mon: some rain arr Tues with fronts. Most rain Wednesday.

The plus side of this switch back to a westerly weather pattern is that the east will see the back of the “spoiler” cool NE wind which brought some gloomy cloud cover in the mornings and colder than expected “warm dry days” this weekend and last week where promises of 25°C never happened in the SE.  With a warmer flow swinging around from South and SW temperatures as humid air is fed over the SE from the balmy South West rather than the cold North Sea.  Update Monday: temps will fall away to mid-teens Tmax as rain spreads more quickly east than first models predicted. For Reigate and the SE the heaviest rain is likely to be at the end of the week as heat builds over Europe and possibly sees convective storms associated with a front over France bringing in heavy rain for Friday / Saturday.   This warm feed of air has the potential to be a Spanish Plume event causing significant thundery activity in the SE.  Check back later for updates on this exciting potential! (looks less likely on latest runs; but wetter weather mid-week more likely now!)

Thereafter, things look to be set in a cooler unsettled cyclonic pattern with LOW pressure systems storming off the Atlantic bringing wetter conditions for the rest of June but still much uncertainty on this one.

In summary: this week the wind will clock round each day from a cool easterly (from North Sea) through Southerly to humid SW and weather is likely to become more mobile but with dry weather hanging on longest in SE and feeling warmer too!  What’s not to like?  It’s Summer, enjoy!