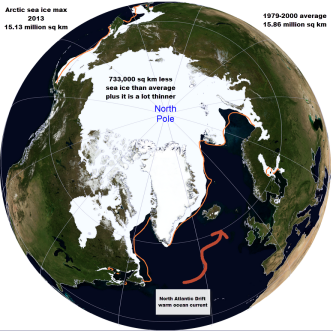 Sea ice used to extend much further in early 20C

A gradual loss of sea ice 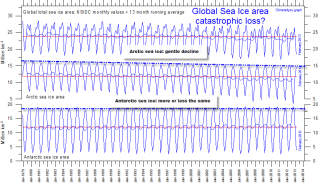 Is it enough to make a difference? 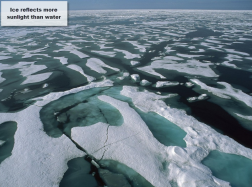 Update 23/04/2013: UK Met Office now backtrack on loss of Arctic Sea Ice as a possible cause. Read it here. Nevertheless, Arctic Sea ice loss could be a future cause of climate change so we will leave it here as a suspect!

Scientists have been monitoring the shrinking mass of sea ice which covers the Arctic Ocean.  Arctic sea ice shrank by 2.7%per decade between 1979-2006 and continues to do so at a faster rate now.  The 2013 ice maximum was reached on March 15 and was the sixth lowest on record at 15.13 million sq km, 733,000 sq km below the 1979-2000 average.  The lowest maximum extent occurred in 2011.  Sea ice naturally expands during winter as more sea freezes over. By March it is at its maximum size, extending furthest from the North Pole. The ice naturally shrinks to a minimum area around the Pole by late summer / Autumn which is when scientists usually take another measurement of sea ice extent.  The Arctic has warmed TWICE as fast as the rest of the northern hemisphere (Arctic Amplification) and the Arctic sea ice has shrunk in area.  In summer 2007 the North West Passage north of Canada became ice free for the first time. Sea ice has a high ALBEDO which means it is bright and white and reflects solar energy (the Arctic gets 24 hours of sunlight during the summer). Most sunshine is reflected back into space off the ice and does not heat the atmosphere or the sea, the energy is more or less “lost” from the earth-atmosphere system.   Less sea ice means more dark ocean water is exposed and, with a lower albedo, this readily “absorbs” solar energy i.e. warms up.  The Polar atmosphere is warmed up by this extra heat flux from the ocean. The “warmer” atmosphere contains more energy and water vapour and this could potentially deliver more humid Polar air carrying more snow to mid-latitudes.
There is a final twist to this theory: warmer Arctic air reduces the difference between Polar temperatures and those further south. This reduced “thermal gradient” weakens the jet stream which feeds off big differences in temperature. A weaker jet stream is less able to BUST the blocking HIGH pressure built by Polar air.  All this adds up to slower moving weather systems in the mid-latitudes which prolongs any extreme weather: the cold gets further south and lasts longer.  There are many factors which control climate but loss of Arctic sea ice and the almost prophetic predictions made by scientists studying the effects it would induce, seems to keep Arctic Sea ice as a key suspect! The video below concerns all types of ice loss in the Arctic: land based and sea ice.