Yet more drama on Friday and snow for February? 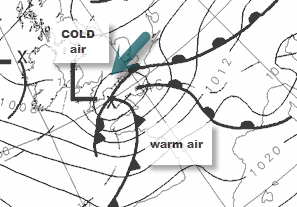 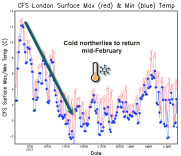 It looks like February could see a return to winter conditions for Reigate (2 small colour charts) and maybe even cold enough for some snow; though with the sun being that bit stronger it is unlikely to be as chilly as last week. The jetstream, currently right over the UK and bringing our stormy conditions and unseasonably high temperatures (12°C today at midday in Reigate), is likely to be shifted south during the second week of February. A blocking upper ridge in the Atlantic and building HIGH pressure over the North Pole will combine to swing winds round to a cool northerly direction over the UK. A LOW over Europe will add to the chill by bringing in periods of cold Easterly winds over the UK as well and it is these which often bring significant snow to the South East.
Meanwhile, this week’s extraordinary weather is not over yet: a deep depression (see big synoptic chart) is forecast to rapidly swing up out of the SW on Friday. Depending on it’s precise track over the UK it could bring heavy rain and strong winds or EVEN some snow. The models disagree by a critical hundred miles or so: MetOffice has the LOW tracking south of Reigate= easterly winds = snow; GFS has it tracking north of Reigate = westerly winds = rain. (Update: UK Met Office model is now on it’s own with snow in the south; all other models take the track of the LOW further north leaving strong SW gales and rain on Friday but no snow for Reigate – snow will fall further north across the UK; so the synoptic chart above is probably WRONG already!!).  In both scenarios the back of this LOW will see nippy northerly winds bringing temperatures right down on Saturday, but at least it should be bright.