From ice sheet to high street! 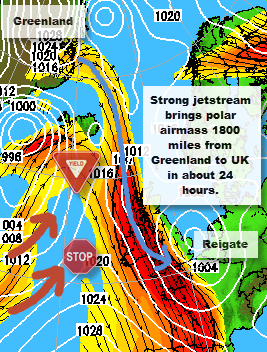 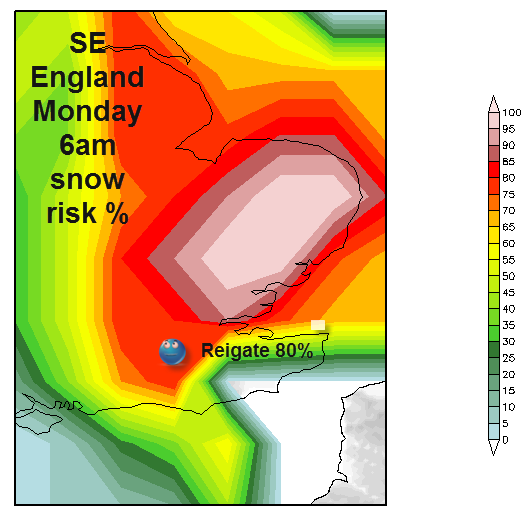 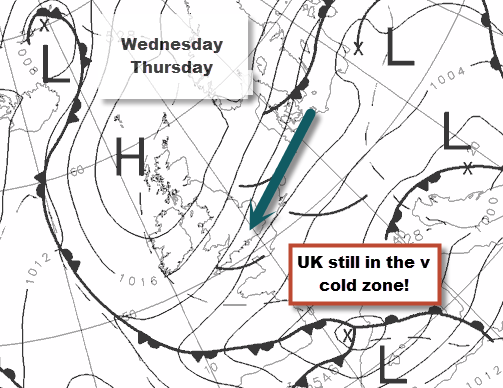 Arctic air travelling courtesy of the jet stream will blow in from Greenland and deliver frigid temperatures and snow to Reigate for the first part of this week. Precise details of snowfall are still changeable but temperatures are certainly due to take a fall during this week but getting there will not be straightforward!

Light snow on Monday (see map left) currently forecast to start falling in Reigate early am (updated sun07:30), could reach (update 8pm sunday:unlikely – looks much less now) but, oddly, temperatures may rise considerably above freezing Monday afternoon (+4°C?) and bring rain for a while probably melting any fallen snow before cooling down Monday night with more snow possible: a v complex situation which will change hourly! A developing LOW along an occluded front later on could bring more snow to the SE on Tuesday when air temperatures will probably stay below freezing all day and wind chill at midday could be as low as -9°C. The reason on Monday & Tuesday … a strong jet stream blowing direct from Greenland at over 100mph, 9km above our head, will bring Arctic air (-50°C at 9km) direct to Reigate in less than 24 hours journey time from “ice sheet to high street”!  A BLOCKING HIGH sitting out west in the Atlantic is preventing milder air from making progress further east.  The cold weather will continue so long as the HIGH stays put.  The situation is likely to remain much the same for a while, though at the moment forecasts are uncertain beyond a few days ahead due to the “sudden stratospheric warming” which is taxing every super-computer weather forecasting model including the UK Met Office, let alone your friendly RGSweather station enthusiasts!

Update! by mid-week the HIGH will slip over to the north of the UK and drag in bitterly cold easterlies from the continent (see map wednesday thursday) Snow showers likely for eastern England.