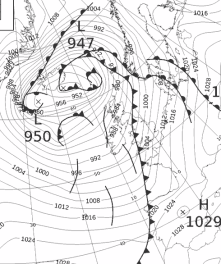 distinctive cold front showed up on the rainfall radar today 29 December as it tracked east across the UK and brought a sharp period of heavy showers. The thread-like line of (red=heavy) showers on the radar opposite shows the cold front very distinctly.  A drop in temperature also occured as the front passed over. In Reigate, temperatures dropped rapidly from steady highs of 11°C in the morning to 7°C within hours of the front passing through. Blustery winds of 30mph also accompanied the front and then dropped off quickly as pressure rose after the front passed over. The satellite photo shows the line of frontal cloud and the bubbly cumulus clouds bringing showers in the polar-maritime air behind the front.  A classic text-book passage of a cold front!